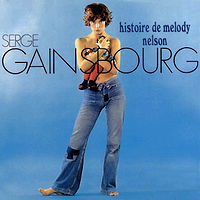 The fine folks at Light in the Attic are rereleasing Serge Gainsbourg's famous 1971 album Histoire de Melody Nelson tomorrow (and with the outstanding job they've done with Betty Davis, I'm anxious to get my hands on a copy of it). Or maybe they're just releasing because this will be the first time it's available in North America.

Wikipedia says of it:

It would make sense, then, that the stylish new bar in Greenwood that had taken Gainsbourg's name would host a listening party the night before (and it starts at 9pm). The details are as such:

It's gonna be a free event to all – that's right, FREE – with giveaways throughout the evening and 60's classics by Serge and other French pop Superheros spun by both Hunter Lea (of Mono in VCF fame) and Steve Quenel (local visual artist/frequent collaborator with Ben Chasny of Six Organs of Admittance).

Hopefully we'll see you there!