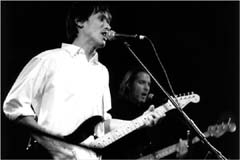 The Preons, Tennis Pro, and Downpilot

We don't want to give away *everything* that happens at an imaginary event, but there were several notable moments at the Preons, Tennis Pro and Downpilot imaginary showcase that simply can't go unpublished.

Here are highlights better than the ones in igDana's hair…

The Preons opened the night with their unique blending of male and female vocals, sound samples, and sweet harmonies. But the coolest part was watching igChar get giddy when meeting Janie, their bad-ass girl drummer. Char knew from reading our site that Janie dressed as a pirate at an early show. And if there are two things Char loves, it's girl drummers and pirates…

Who could forget when Tennis Pro dedicated the last song to us… and it turned out to be a song about us? *Sigh* We believe the title is "Imaginary Girls" — and we know it's an incredibly hook-laden masterpiece!!! They called us "Phantom hotties." That pretty much ruled. Then they ended the set by smashing a vintage tennis racket to bits and tossing it into the audience.

And of course, there was birthday boy Paul Hiraga of Downpilot. We brought him a cake. We all sang to him onstage. Then we collided and I nearly smashed chocolate cake all over his nicely pressed white shirt. Then I caught it — I have no idea how; I have the world's worst reflexes. Then Paul smashed a second vintage tennis racket.

Then they played a gorgeous set. It was great. The end!

Wheee! Next event, Silly Love Songs, February 13th. Be there!