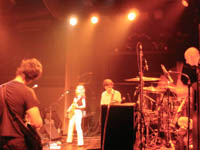 Doves and Elbow and Luna, oh my!

Guess this is all going to be about me, since I'm the only girl lucky enough to get out two school nights in a row for these shows…

The Doves/Elbow show (or is that the Elbow/Doves show?) ended up being the opposite of what I expected:

I frankly wasn't nearly as impressed with Doves as I thought I would be. I saw Elbow with South earlier this year, and I wasn't all that impressed with them at the time. This time they sounded really, really good. Go figure. That was my Monday.

So I'm sitting at work in this really boring meeting on Tuesday, when an email from Liz titled "Afternoon Delight" pops into my inbox, which reads, "aye. i thought you would be the only person to get a kick out of this." And it contains a photo of Liz with Dean Wareham, babelicious talented lead singer for Luna, taken mere minutes earlier! Good Lordy! Times like that I start thinking I need to reconsider my day job…

It was one of the worst pictures ever of me. Perhaps it is becuase Dean is so beautiful.

Sigh. I am still lamenting not sucking up the cash and taking the time to see the show. If I had known I would be able to MEET Dean… damn. I totally would have done that.

I must admit that I went into this show a bit hesitant. I love Luna. I love Galaxie 500. I adore the new album they are touring to support ("Romantica" on Jetset records) and I even had the good fortune of seeing them do an acoustic set earlier that day. BUT, the last time I saw them… well… I left with a distaste for the bass player. Obviously, I am all for female bass players, but I sensed that she lost the beat several times throughout the show — and so obviously that I had to look away from stage. But this time she was a bass player transformed! That "Dean Wareham Bass Player Boot Camp" is amazing. I can only hope to one day match her bass prowess. Throughout the show they reminded me of that elegant jangle I fell in love with from their first ep ("The Slide EP"). They played the new songs with such comfort that they felt like old favorites. The seductive "Bonnie and Clyde" left the crowd transfixed. No matter how jaded you walked into the Showbox that night, I doubt you're humanity if you did not leave warm and "Fuzzy Wuzzy."