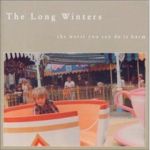 The Worst You Can Do Is Miss the Long Winters Live

First thing: if you weren't lucky enough to see The Long Winters live, DO NOT MISS IT NEXT TIME!!! And if you don't already own their debut CD, The Worst You Can Do Is Harm, then stop reading this column and run to go purchase it. Right now! Then please come back and continue reading.

The Long Winters remind me of tragically romantic boys who can't seem make a relationship work despite their best efforts… and they charmed the audience by playing every song off their debut release, The Worst You Can Do Is Harm, plus a couple of new tracks (!!).

Keyboardist/singer Sean Nelson (ex-Harvey Danger) was charming as ever, engaging the crowd as to whether, "Anyone had seen The Hives earlier before heading to the Crocodile?" Moderate but enthusiastic applause answered his query. Nelson didn't miss a beat: he deadpan replied, "Yeah, I missed it because I had to set up here. But I did go to Ikea earlier today and got a great bookshelf." He's funny, that Sean. All I know is, the Hives were interviewed on freeking THE END before their show — instead of lending their support to the decent independent music station (and we all know which one I mean). So pshaw to the Hives (with all due respects to Liz and her rockin' review of the show)!

Hey! The Hives played the show of the year!

I know, I know… and we will get to that! First I need to finish gossiping about the show! I'm sure our readers are dying to know that the always charming Ken "kissy-face" Stringfellow was in attendance, regaled in plaid blazer with conflicting plaid tie and cowboy boots — red ones, no less. What is it about the tall skinny boys, who can pull off any combination of clothing patterns and still look smashing? Per Ken, cowboy boots are the closest thing to a costume the Long Winters have. Guess he would know, since he left with them the following weekend for their west coast tour.

And while we're talking about cute boys, two lovely local artist, Matt "so squeezably cute!" Parker and Randy "teen heart-throb" Wood, also came to the show — and Randy was on a first date, no less! Rumor has it he got a little kiss goodnight. Rumor also has it he wasn't the only one…

"The Hives are Law: The Imaginary Girls are Crime!"

The Hives with Mooney Suzuki was undeniably the show of the year so far. Is it good or bad that I was expecting as such? Usually such assumptions leave me disappointed (i.e. like every New Years and 4th of July celebration since the beginning of time). Finally, my anticipatory exuberation was not only met — but raised.

The Mooney Suzuki were well worth me forcing my friend to leave his drink at the bar to run into the pit. You all know that story about the Mooney Suzuki, right? About how 2 or 3 members of the Strokes tried out to be in the Mooney Suzuki, but were rejected? They ended up forming the Strokes instead. Quite an ironic twist of fate —, but in the end, everyone made out well. The Strokes get all the Spin articles they could want and that one guy in the band is dating Drew Barrymore. The Mooney Suzuki, with the Strokes-fed heightened visibility of New York garage rock, get the critical attention they deserve and get to keep their cred in tact.

Oh — back to that drink-left-on-the-bar-worthy performance. The showmanship of the Mooney Suzuki is only rivaled by the Hives. When was the last time someone yelled "Hello Seattle" that you actually wanted to respond with an as-loud-as-you-can-retort with your arms in the air? Or when was the last time that a lead singer asked a nonsensical question to the audience, only to answer it with the first line of the next song sung? Ok, besides that last Barry Manilow show… When? Right. My point exactly.

Thank goodness there was a band in between the Mooney Suzuki and the Hives so that we could recover and relive the MS set with fellow audience members. 1 Man Army would have been a bit more noteworthy had they not been on stage during the line-up's necessary refractory period. This is what I did gather: 3 piece, guys from San Francisco. Rumored to have been discovered by Billie Joe Green Day.

Aye… the Hives. This band single-handedly whooped Seattle into a frenzy — a nearly impossible task. There was not a person in the room who did not leave flabbergasted at the showmanship of those fellows. Like a cult leader (except indisputably more believable), the lead singer had us chanting "The Hives" upon command by the middle of the show. Before I knew it, I found myself drawn to the pit in front of the stage, intoxicated by the energy of the crowd, the band, the drums, the guitar, the sweat. Jumping in unison with strangers-come-cohorts, basking in the moment of unadulterated beauty of the finest rock n roll show this town has seen for some time… the bruises procured were well worth it.