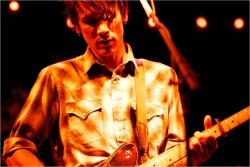 So many well-assembled bills lately. From the new-new-wave of Longwave {with stellastarr* and Black Nite Crash}, to the punk rockedness of Pistol for a Paycheck with Snitches Get Stitches, we've spent the past few weeks saluting show-bookers all over town.

And now this: a doppio CD release party feature the ever-dreamy local bands Downpilot and Dear John Letters (with the amazing indie-pop openers Marazene Heartbeat Clock, who we sadly only heard for their final minutes, and who have a groovy web site!).

Now, we don't usually write about bands this close to our {ahem, extremely hard and fast} publication date, but both Downpilot and Dear John Letters played exceptional shows, and are therefore entitled to exceptions. So — with mere minutes 'til posting this issue of the site live, we're going to gush.

For the past few weeks, whenever I've heard that song on KEXP — you know, that song you like but you can't quite place who it is — I've come to find it's a Downpilot song. The band sounds mellifluous, with such pretty open-throaty vocals from frontman Paul Hiraga. It's rare I'll call an indie-rock band "pretty," but in this case, the adjective is apt.

Because of Downpilot, I've shifted from my banjo obsession of a couple of weeks ago to the violin. They also featured nice girl/boy harmonizing, which has also been seducing my ear lately. Downpilot are everything I've ever wanted, all rolled into one band!

I loved Anne Marie Ruljancich's kickass skinny black violin, and her strong yet sweet harmonies. With Carissa's Wierd gone (sob!!!!) we need a good place to get our female indie-rock violin on. I offer you Downpilot.

I felt highs and lows in every song, with a warm intensity to the lead vocals that seemed genuine and heartfelt. It's music to smooch to!

Oooh. It's not just kissing music — it's 3am lingering to make out music. Their music embodies that longing, lingering- way- too- late- after -a- good- date-b ecause- you- don't- wanna- go- home- just- yet- but- you- don't- want- to- play- music- that's- TOO- obvious {for fear of scaring date away} or-too-mellow {for fear of lulling him to sleep}.

It's music that speaks to romance with intellect, to longing, and perhaps to that one bold move that could culminate into something fantastic, should you stay up for a little while longer, perhaps for just one more song…

Yep. That's what I'm going to do with my new copy of the CD!

Phew. I think I'm weak in the knees.

Better talk about those fantastic Dear John Letters now! They also reminded me of a date.

Specifically, in a modern indie-rock teenage romance, a Dear John Letters song would work great for the video montage scene — you know, that five minute segue where you get to see a zillion different clips of the romantic couple doing oh-so-cutsie things! Yea, that. In a really cool teenage movie, Robb Benson's voice would provide that soundtrack.

I love Robb Benson's voice! Not because he's gonna perform buttrock karaoke at our party, either. Well, not just because of that!

While I believe Robb could sing an OUTSTANDING Rush, or Triumph, or Mr. Big (yipes!), I'm glad he shares his vocal stylings by fronting a band with such clean, sparse pop-rock melodies. No layered sounds here — just simple lines with a gorgeous tenory voice soaring over the top.

They play happy rock. And Robb Benson is a musical machine, fronting Dear John Letters while simultaneously working on his solo stuff. I want their CD. I wish I had purchased it that night, for now I'm not sure where to order it.

They all look so approachable. And, they all have beards. You know, Robb could shave his beard and just leave the mustache. That would be super buttrock…