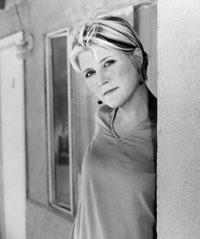 Kim Richey is a tough {but fascinating} nut to crack. A songwriting darling in Nashville for years {provider of tunes for the likes of Trisha Yearwood and Patty Loveless and Radney Foster, to name a few}, she was a slightly off-the-radar alt-country performer in her own right — her self-titled 1995 debut and 1997's Bitter Sweet were gorgeous albums displaying an eclectic range of tones and emotions, fascinating stylistic touches, and lovely bluesy twang. Then came 1999's Glimmer, and last year's Rise, each of which took her progressively farther out of that familiar roots realm and into the poppier land of MOR. Even so, as a writer she's cut from the same cloth as one of my all-time favorites, Mary Chapin Carpenter, with poetic and knowing songs about reminiscence and holding on, day-to-day blues and hard goodbyes.

Her fabulous Bumbershoot show was heavy on Rise material, but surprisingly told in a Bitter Sweet way: less slick, more genuinely jangly. Out with the synth accents, back to the sparer arrangements, backed by an excellent little band featuring a lapsteel/guitar guy, upright bassist, and drummer, with Kim on acoustic guitar. Looking like a hip Martha Stewart, and speaking a bit like Marge Gunderson {she's from Ohio though}, her singing is all Kim Richey, strong and sure — and this live performance on the little Backyard Stage was pure enchantment. "Fading" and "Those Words We Said" were especially sublime, the latter concluding with a slow swampy jam that just made me incredibly happy. The new song "Travel On", a longing-filled populist ballad that would seem right at home in Emmylou Harris' catalogue, was executed with fine folky brilliance. And "Reel Me In" was given a measured and decidedly loungy bass-heavy treatment that could have fit in nicely at Jazz Alley.

But the big surprise was a brief appearance by Pete Droge, dueting on "Electric Green", which he co-wrote with Kim. It's one of those timeless tunes you think is a cover {like that "Don't Know Why" thing on the blockbuster Norah Jones disc, and Edie Brickell's later Simon-produced stuff}, but really just pushes some inexplicable archetypal buttons to simulate its melodic déjà vu. The live dual rendition was magic, and when it was done I witnessed Mr. Droge anchor himself discreetly offstage to bask in the last moments of the show. It was clear that he loves him some Kim Richey. As do I.