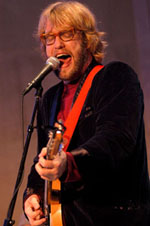 Imaginary Boy Lorenzo is my source for political news, and I am his for new music. He's the guy who told me about this Dean character back in March, and I'm the one who told him he needed to buy 69 Love Songs . It's a great symbiotic relationship that way.

I called Lorenzo on Sunday and insisted he head to EMP for the United State of Electronica show. The insanely animated gay-boy-discoteca cheer was a no-brainer, and I earned big imaginary bonus points for that one. Then on a whim, I convinced him to stick around for the Long Winters, one of my all-time favorite bands, local or otherwise, figuring he might dig it. Little did I know what a life-long fan I'd made.

In Lorenzo's words: "The USE EP is awesome, and I know when I hear these songs in the future I will affectionately recall Summer 2003, the summer of Seattle sunshine. But the Long Winters CD — it's not based on nostalgia; I just know I'm going to be listening to these songs for the rest of my life."

Plus — this was igChar's first Long Winters show!! Good thing too, as this was a prerequisite and part of the imaginary girl initiation and hazing phase for her — directly in-between the "learning to survive on lattes, wheat thins, and carrots sticks with only five hours of sleep a night for weeks at a time" phase and the full-on "shooting beer bongs with the frat boys" phase.

So Char, tell everyone about your first time…
{and hey everyone — be kind to the new girl!}

The Long Winters set was a masterful blend of emotionally driven lyrics and brilliantly improvised stage banter. John Roderick and Sean Nelson are the kings of amusing stage antics. It's obvious that these boys spend a lot of QT together {I say that because of how easily they bounce witty comebacks back and forth. Oh, and because every time I've seen them out in "the real world" they are always together…}. Their live show is entertaining on all imaginary levels. In fact, I want them to release a Long Winters live CD because a lot of their charm is lost on their album when they're confined to songs and no talking. Or they should have their own late night talk show where they are the house band. Or release a DVD of their funniest shows. Or have video clips on their web site.

Or, or, or. ok, I'm getting a little carried away with the promotional materials. Dana, Liz, why do you let me go off on those tangents? You're supposed to cut me off.

What? Oh, sorry, I wasn't listening. I was thinking about running over to Top Pot to get an iced chai refill.

Um, are you done with the carrot sticks yet? The Pi Kaps are gonna be here any minute.

Yeah, so the Long Winters. Liz loves them. Dana loves them and Lorenzo loves them. I'm thinking about loving them.