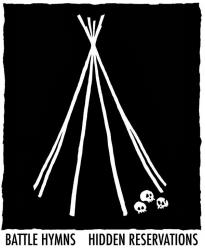 the sleepwalker February 20, 2008 no Comments

Seattle's Battle Hymns' debut Hidden Reservations demonstrates that the band is keenly listening, observing, and processing. Their bio informs us "Hidden Reservations captures the sound of a country crumbling under its own weight; offering protest against apathy and hopelessness, sung for those not quite ready to succumb." That statement may be a bold one, but the material backs it up.

While on the surface, one might cite Neil Young (name-dropped in "American Evenings: I Need A Maid"), Wilco, or Tom Petty as the sources, something far more sinister peeks through. There is certainly a heavy alt-country element present, but rather than the rolling, gentle waves of many acts in genre, Battle Hymns is sure to let you know that the urgency is greater. The drums are big and booming at times, the guitars grate, and just when you get comfortable, the lyrics spit venom into your eyes. The album is stylistically cohesive, but diverse enough to maintain interest.

The opening track, "Telegram No One" enters slowly with a rising digital static dripping over the barely audible foreshadow of the song's lyrics: "just another field transmission. Just trying to keep our noses clean." The band immediately establishes itself as the guilt-ridden, gun-slinging drifter coming into town just to clean the place up. If you have a problem, if no one else can help, and if you can find them, maybe you can hire…Battle Hymns.

The only guilt that Battle Hymns might need to wash from their hands arises from the fact that the cleverly ambiguously titled song clocks in at a mere 1:33. Still, I suppose that it never hurts to end a song while the listener desperately wants and needs more. Luckily, we are not left out in the cold. The song is immediately followed by the beautiful and heartbreaking "For Arlene (On Memantine)," presumably inspired by the confusion and disorientation of an individual coping with Alzheimer's disease. The songwriting, however, is excellent enough that the literal topic can be applied by the listener onto many figurative emotional and experiential realms.

Hidden Reservation's momentum plows on from this rock-solid start straight through the end, highlighted by exceptional standouts including the catchy "American Evenings: I Need A Maid," the cryptic "Never Trust A Matador," and the politically ravenous "Wolves at the Gate." The album has beautiful arrangements, simple, but extremely effective instrumentation, and highly charged vocals. The lyrics teeter between the accessibly simple and the intriguingly obtuse, but never stray toward the trite or the absurd. This means that Battle Hymns has just the right blend of the clear and the cloudy to make us listen again and again. If you're wise, that is just what you'll do.