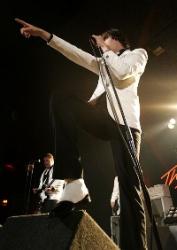 "Collect the clues and connect the dots."

{With special thanks to Justin Dylan Renney for the amazing Hives and Sahara Hotnights photos!}

I was both excited and nervous about the Hives show. The last time I saw them, it was spectacular, the kind of spectacular that you feel when you are living in a small town — say, oh I don't know, Dover, Delaware — and a really inspiring band comes through and when you see them you have a life-changing revelation. The kind that changes your outlook on life forever. It inspires you to either quit your job, or to ask out that cute girl behind the counter… or to throwaway all of your khakis and fill your closet with plaid pants.

The morning after the last Hives show I saw, Dana and I compared notes on our previous evening. We both had stellar evenings out. She saw a great Long Winters show at the Crocodile. I saw the Hives and was talking a mile a minute about the flashy attire, the showmanship, and the unbridled energy. I was high on life and high on the Hives. Post Hives (PH), I ached and searched for something that I could believe in… something with passion… something imaginary.

So, I guess you could say I had a bit of performance anxiety — not for me, but for the Hives. This time, igDana was attending the show with me and most of what she knows of the Hives is what I have said in passing exclamations and proclamations.

I worried, "Will they still be inspiring?" in the same breath as I shouted, "Nulla Salus Sine The Hives!"

I was super excited to see both bands: the Hives, because I it had been two years since I missed them the last time they came to town, and Sahara Hotnights, because I've been a fan since the Imaginary Mad Professor introduced me to them with a birthday gift of C'mon, Let's Pretend many years ago, before the American indie-press knew how to say "TONÅRING."

The Sahara Hotnights fill the void in my life left by Elastica. The lead vocals are shrewd and seductive against a backdrop of rock that would make Brody Dalle jealous. The Maria Andersson, the hot lead singer, is dating the hot lead singer of one of my favorite boy bands (the HIVES). Together they fulfill the void for all girls who are boys, who like boys to be girls, who do boys like they’re girls, who do girls like they're boys. I have many other fascinating theories about the Hotnights/Hives and all things Swedish that I'm going to tell you all about soon…

Drummers look better behind the drum set, but not in this case. Josephine Forsman looks like she should star in a Prell® commercial, her long Swedish blonde hair thrashing as wildly as her sticks while she crashed and clobbered the driving rhythms that fueled each rock song from atop her riser platform.

They are Sweden's version of the Donnas — which is so unfair. They get the Sahara Hotnights and we get the Donna's!?

The Hotnights rocked through an enthusiastic set featuring tracks from all three of their stellar releases. "Quite a Feeling" has been a favorite tune of mine for years, so I was thrilled to hear it performed live. The crowd particularly came alive for "Hot Night Crash," the self-extolling anthem break-out single from their latest release Kiss and Tell.

It staggers me to think these girls sound like seasoned pros at the collective ripe old ages of "early 20s." They're incredible musicians and sounded amazing live, but I've gotta say, no opening band could match the onstage magic that was the Hives.

The Hives came ripping out onstage under a red neon scripted sign, as bold and righteously arrogant as the Hives were themselves. Frontman Howlin' Pelle Almqvist controlled the mic and he commanded the audience. The band moves around like they were on an amusement park teacups ride. They pranced around with syncopated mayhem, riling the crowd into mad whirling dervishes.

And those outfits! Uniformally dapper, the Hives came out in their trademark Tyrannosaurus Hives black and white matching suits. And what was it that they're wearing… what kinds of ties are those?

They're skinny ascots, I think. You know, like what the KFC Colonel wears. He dressed like the Colonel and he postured like Steven Tyler and Mick Jagger {which is who Steven Tyler learned to posture from}.

I sense a Leo in his chart. I feel a kinship with him. Definitely a Leo sun, possibly also a Leo rising, moon, and in his 8th house. That's how much he roars. Pelle is a true super *star* of celestial importance, who undeniably glows in the spotlight. He has IT, that quality that makes you jitter when he's on stage; it makes you stop whatever you are doing or gulping whenever they talk or perform. THAT something. He transcends the superpowers of even an unbridled Leo.

The Hives play high-class punk created by people who care what you think about them. Which is highly unpunk of them. They're against the institution only if they're not the institution. Pelle has the magic and mystique of a televangelist. I am ready to tithe 10% of my income to the Hives. I AM A BELIEVER!

For so long, the Hives been spouting off about their supremacy. Now, here they are, touring the US to sold out shows (again), and once again. The Hives really have become everyone's favorite band. For some, it has been that way all along. For others, this is their first revelation.

Regardless, we are all one nation, under the Hives. Where is my checkbook?

Yes, they have the ability to turn Seattle {a notoriously stoic group of aficionados} into a mass of giggly, goofy, dancing superfannies. I found myself spastically applauding every song… even the ones I didn't know!

My favorite moment was when he proclaimed from his stage pulpit with the ferocity of a Baptist, "Are you with the HIVES!?"

I am with the HIVES!

The Hives should be everywhere! And we all say, AMEN.

Yea, they should totally have their own Saturday morning cartoon. And breakfast cereal. This is like church. A church I believe in.

I have a theory. Sweden is the new UK is the new Seattle. Don't get me wrong. Seattle WILL ALWAYS be the Seattle and will always be THE PLACE to be to me. But, you can't deny the evidence:

I'm a believer. Let us all climb another link on the music superstardom evolution ladder.

We were so hyped up Post-Hives, we were defenseless against the merch table. We pulled funds and emptied our wallets. Who needs money for cab fare or additional beverages? We need Hives t-shirts and Sahara Hotnights CDs!

I haven't purchased that much merch (two t-shirts, a sticker, a CD, and a free poster — score!) since I got to see Journey back in the late 1980s, when saved my babysitting money for weeks.

Imagine our adolescent-like excitement when, in our feverish search through our change purses, we saw all the the Sahara Hotnights come out to (wo)man their own merch booth! Way too amped on rock and roll and outta control merch-spending, we simply had to meet them and of course, document the moment in photos accordingly. Luckily Sonic Boom Nabil was nearby and had a steady hand to take a picture.

What I love so much about this photo is how well we blend. It's really hard to tell where the hot Swedish rockstars end, and the imaginary girls begin. That's what I think. Johanna and I laugh about all the time. She's such a crackup!

We all look so Swedish!