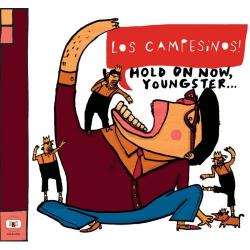 I thought I'd start this review with a picture of an adorable bunny.

That is the animal world representation of Los Campesinos! When the band goes home at night after fighting corruption and injustice in the world, they morph into adorable bunnies. That is how cute they are. That is their schtick, if you will, to batter you with cuteness, like a Louisville Slugger made of pure love. There is nothing particularly wrong with that, in fact, it is their strength. They cull bits of many of the bands we all know and love: Rilo Kiley's charm, Pavement's sloppy anarchism, Art Brut's rock and roll abandon, and they combine them into their own mold. Sure, to an extent, they can come across as a one-trick pony if you're not into being seduced by delightfulness, but if you are, you don't stand a chance against Los Campesinos!

Hold On Now, Youngster … runs a fairly straight-forward formula. The song starts off restrained, ideas of love and devotion and cuteness are presented, the band then rocks out with about million members (ok, really 7). You could say that Los Campesinos! (and no, not Spanish, but Welsh) exist as post-emo, taking the abrasive, wall-of-sound of those angry post-punk (sorry about all the jargon, but its necessary here) like the Get Up Kids or the Anniversary and converting it from the gloom and doom that those bands explored to a tsunami of pure fun. Imagine, if you will, fusing the DNA of Tullycraft and someone like the Buzzcocks or Mission of Burma into a single chimera. That is Los Campesinos! "Death to Los Campesinos!" fits this mold perfectly, as the album open with this song about wanting to be a robot set to a tune that sounds like the band is potentially on fire. You can't help but be charmed by their attempt to be mechanical with they throw out lines like "If you catch me with my hands in the till/I promise, sugar, I wasn't trying to steal/I'm just swimming in copper/to smell and pretend like a robot." Now that, my friends, is endearing … in a horribly creepy sort of way.

If anything, Los Campesinos! seem to have two setting on their blender: very slow and frantic. "Broken Heartbeats Sound Like Breakbeats" is of the latter population, sounding like an emergency put to tape. You wonder if the band noticed a horde of wild dogs trying to get into the studio when they were recording, it has that sort of desperate energy. However, this full-on frenzy approach might not be the band at their best. No, it is songs like "Don't Tell Me to do the Math(s)" or "You! Me! Dancing!", where the band build and release the musical drama throughout that are really captivating. "Don't Tell Me to do the Math(s)" is perfect nerd-rock, making reference to Communist Russia and the Dewey Decimal System amongst other intellectual ideals, it comes across almost like an academic Replacements track. The revised (from the Sticking Fingers into Sockets EP) version of "You! Me! Dancing!" take a while to get moving, but the massive xylophone line (yes, I am a sucker for that) makes the song remarkably entertaining. Then, of course, Los Campesinos! discusses the idea that cute stationary can lead to foreplay (and beyond) on "My Year in Lists", a song that also is an excellent example of the fact you never know what/how many instruments the band might break out.

There seems to be a lot of discussion of Los Campesinos! in comparison to Broken Social Scene, which is justified considering they opened for BSS on tour, they're signed to Arts & Crafts Records and David Newfeld produced the Sticking Fingers into Sockets EP. However, having never really understood the fascination with BSS, I feel like comparing Los Campesinos! with Broken Social Scene does the Welsh band an injustice. Los Campesinos! have an obsession with pop songs at the core of their music, this is evident by the fact that, in anything, the key fault for Hold On Now, Youngster… is that the songs can begin to seem repetitive, slightly formulaic. If doesn't hurt that the formula, to me, is great, but I can understand that many people might just hear a bunch of youth slamming their instruments around, like a more rock oriented Go! Team (exclamation point and all). Los Campesinos! most likely have a lot more, musically, to offer, but right now they seem pretty happy to just rock out (which begs me to ask, why in the name of the Gods did they leave "International Tweexcore Underground" and "We Throw Parties, You Throw Knives" off the album? Sure, they released them on EPs and singles, but in the U.S., that just doesn't count, especially with two tremendous tracks like those).

Hold On Now, Youngster … isn't perfect. It is, however, so cute that you can't look away even if you want to. Some of you might be repulsed by this level of adorableness, but for those of you made of stronger stuff, Los Campesinos! are fun, energetic and captivating like opening the refrigerator and finding it full of tiny, frolicking kittens. The band is definitely pandering to the nerdcore scene and that demographic will eat them up, but just because you think you're too cool for that should not turn you away from Los Campesinos! You might just be missing out on the underground summer album of 2008.