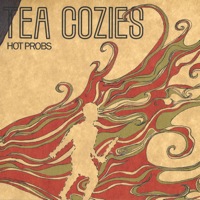 Hot Probs is the newest album from Tea Cozies, and it is a pure pop record – and a damn good one at that.

Tea Cozies are a three-fourths female pop band that has crafted some very fun and catchy songs on this very good album. The setup is fairly traditional: two guitars, bass and drums. Although I’ve only seen them play live one time – and they were not playing their own songs, but Liz Phair’s (at TIG’s Exile in {Imaginary} Girlville night last summer) – it was obvious from their take on Phair’s “Gunshy” (where they increased the tempo but lost none of the emotional impact of that song), that they could be a really enjoyable band to listen to; Hot Probs confirms it.

After the first listen of Hot Probs, it sounds familiar. It’s full of pop tricks like handclaps and “oh oh ohs”, it borrows from surf pop (think The Beach Boys, Jan and Dean and Frankie and Annette), making for a great record that gets better as the weather gets warmer. It makes sense that the album was produced by Erik Blood, the Turn-Ons guitarist and producer who is a fan of Phil Spector’s production aesthetics and understands pop music as well as anyone in the northwest.

The album opens with “Boys at the Metro”, which has the jerky guitar opening from Imperial Teen’s “Baby” on top of a Gina Schock-like drum beat. It takes over a minute to get to the lyrics, which are “the universe is dead, it’s just a theater, hey fuck you Spielberg.” Even with the four-letter word directed at the famous director, it is one of the catchiest songs on a very catchy record.

“Like Luca Brasi” is arguably my favorite track on the record (track three, often the best track on any given album). It’s a story set in a bad dream about a trip swimming that, well, ends badly. It has my favorite verse on the album, which includes “I should have listened to my instincts, because I can’t swim for shit; tell mom and dad I can’t do the dishes, now I gotta sleep with the fishes.” It reminds me of the Sleater-Kinney song “Wilderness” with the dual-layered guitar parts, the “bad idea gets worse” storyline and the harmonies on “Like Luca Brasi” sound like Carrie Brownstein’s here. The Tea Cozies’ song is much sugary, of course, but the spirit from my absolute favorite band is transcendent.

“Tri-Part-Ite” is another highlight, with its fun swagger and Dick Dale-esque surf guitar parts, sounds like a hit song from the 1950s or early 60s. If you had a convertible, this would be a song you want blasting with the top down, in ninety degree weather while you cruise around while wearing sunglasses.

If there is a misstep here (and be aware that that is a term I am hesitant to use), it would be “Huffy Walrus”. The song isn’t bad per se, in fact far from it. The song is well-constructed and still pretty catchy but it is more of a garage rock song rather that a sugary pop number and the guitar parts are more Jack White (see The White Stripes’ song “Girl You Have No Faith in Medicine”) and less Dick Dale. That’s fine and all (and saying “that song doesn’t sound like the others” is probably a pretty dickish thing to complain about anyway), but I also felt like it interrupted the continuity as there was a power pop track in the middle of a sunshine pop album. Still, though, that’s a minor quibble overall.

Hot Probs is a very solid record from a promising band that recalls the upbeat, fun, summertime pop I grew up on. I’m suspecting that band members Jessi Reed, Brady Harvey, Kelly Viergutz and Jeff Anderson grew up loving the same Beach Boys music that I did. On the band’s bio, they list artists like Talking Heads, Can, Pixies and Stereolab as influences and their one-sheet bio features a quote comparing them to The Breeders and PJ Harvey. All fine artists and ones I’d want to be compared to, sure, but really, Tea Cozies have a lot more fun. And so do their listeners.