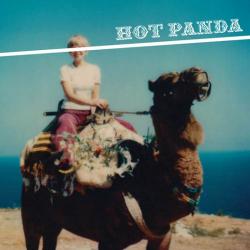 Hot Panda is Chris Connelly (vocals, guitar), Catherine Hiltz (bass), Heath Parsons (keys, accordion), and Maghan Campbell (drums), and they’re from Edmonton, but you know, they could be from Australia or New Zealand sometime in the mid-80s, or New York in 1977 or 2001, or the UK at the beginning of the 90s. They could be from anywhere and anytime that a double down of two sass-pop loving young ladies and lads could be dying to lie face down in your carpet after coming through town on the wild horses of kicked-out-of-art-school, meat-and-potatoes, flippant riff-a-roll.

Starting with “Pools,” the zappy third track on their latest release How Come I’m Dead? they leave a lasting person-shaped impression in more than just your carpet. The whole album as one personality will fiddle its way into your hum-box, even the somewhat more basic chords and rhythms, which just make Connelly’s whiskey-snide voice and Tom Verlaine-kissed crunch even more distinctive. He has a smart-ass singing persona as veteran-defined as any baroque deliquent since the Mick half of the Glimmer Twins, making you swear this is a come-back album from a seminal art-punk band.

It might get a bit dizzy and gauze-eyed when tempos speed up (“Mindlessnesslessness”), or lose the strength in its calves when the lyrical imagery floats on guitar fuzz (opener “Membership Fees (Intro)” and closer “Late Night Calling (Outro)”). But filling up the steel-abbed torso and hot-haunches are Nick Cave/Triffids ramblin’ A-C&W (alt-country & western) “Shoot Your Horse” (with every necessary quadruple entendre dropped in, and a great duet with — hey, they need to tell someone who’s singing along with Connelly on this, I can’t find that info anywhere), the go get some more late night lost city soul-stroll of “Fuck Shit Up/Hell Hey Hex,” and the spent-all-the-financial-aid-on-X-and-condoms “Start Making Sense.”

The lyrics are just oblique enough with narrative and Connelly may be a bit sarcastic (he sounds like he’s laughing at himself most of the time when he sings), but sometimes he even surprises us all when he shares a line that cares. The greatest joys of Hot Panda’s How Come I’m Dead? come out of the same kind of punch-drunk shock of someone asking the question of its title: Weird scenes from the youth hostel dark side you don’t expect, wrapped up in taut rock music played by road-students capable of capturing control as much as rolling out the chaos. Now I need to go check out their previous two releases, the EP Whale-Headed Girl (2007) and full-length Volcano…Bloody Volcano (2009) before they arrive in Seattle to light up Cap Hill like it’s “1995” (that’s a song on this album — see what I did there? Oh, whatever.) By the way, fellow gear-geeks, the mastering was done by Alan Douches, and you may know that he’s great at mixing trippy keys-strings-bass like this quite well with what we used to call “dance records.” Recorded version of the band or not, when they arrive, I’m betting I’m going to want to do just that. (Dance.)