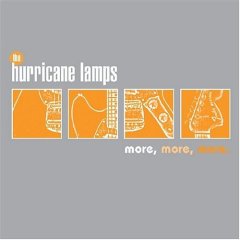 The fifth and latest release from D.C.'s the Hurricane Lamps is a fine collection of melodic and catchy songs. It's hard not to be impressed with the outstanding garage pop riffs and the infectious mood of the album. Raw but sweet in sound and production, this CD emits a sense of both dark angst and buoyant happiness. The feel is that of a sunny, popsicle scented suburban day where little kids chase the ice cream truck and teenagers smoke pot behind someone's garage.

The band has a knack for clever and effective arrangements, and instrumentally the songs are universally strong. Musical nods are given to several influences, from the Stones to Duran Duran, with a clever use of Iggy Pop's "Candy" refrain on track 8, and the band has done well emulating their heroes, stripping things down to the basics of good rock: simple chords, lilting but powerful vocal harmonies, and ear worm producing lyrical refrains.

The most dominate feature of The Hurricane Lamps' sound, however, is lead vocalist Eric Tischler's voice, and be warned it is an acquired taste. Tinny, high-pitched, and strained, these vocals may send you bolting for your treble knob, but the problem is not your stereo. Some listeners will love the indie-boy quality of Tischler's voice , but it is hard to get over the fact that demanding lyrics like, "Lay down beside me and tell me you miss me — I've got love, I'm gonna show you tonight" sound like they are coming from your friend's 10 year old brother. Though not off-putting enough to negate the album's solid songwriting and well-crafted if somewhat clichéd lyrics, it is a voice that will definitely set some teeth on edge.