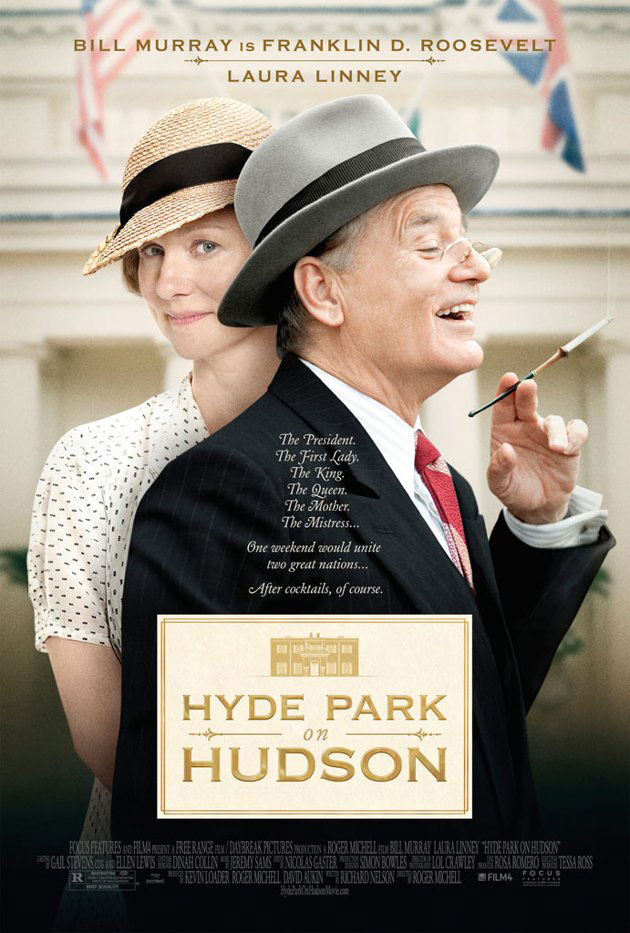 {Hyde Park on Hudson opened in Seattle on Friday, December 14, and is screening at the Landmark Egyptian Theater as well as the Bellevue Lincoln Square Cinemas}

Hyde Park on Hudson is a fascinating film, but not in a particularly positive way. It's fascinating as a demonstration of how any numerical 1-5 star type rating approach would miss how good the best parts are, and how "meh" the rest of the picture is.

Hyde Park follows a relationship between FDR (Bill Murray) and a somewhat distant cousin Daisy (Laura Linney). Over a critical weekend in the British/U.S. relationship on the eve of World War II, the Roosevelts entertain the King and Queen of England in their home.

The picture is a grab-bag of messages. History lessons, thinly veiled commentary on the nature of media presence in the modern era, dark romance, and aspects of period costume drama crash together. Producing a work that's mostly pretty dull, but decorated with an occasional flash of genius.

The screen comes sparklingly alive whenever FDR interacts with the young King (Samuel West). In those moments with West as a foil, Murray breaks out of the too understated depiction of Roosevelt that he skulks about in the earlier scenes. The two men play off each other in an engaging way that should go on much longer than it does. That sparkle and zest hurtles into a wall of "whatever" though, whenever Daisy appears onscreen. Which if you include the near ever present voice over happens a lot. So unless you've always wondered what a tastefully shot scene of FDR getting a hand-job in a field of flowers would look like I'd suggest not rushing to the theater for this one.

No … not kidding … seriously.

The based-on-a-true story events at first seem intriguing. Daisy is called to FDR's nearby home one fine day. He's bored and mother thinks that inviting over a member of the extended family will help. Things are awkward as first as Roosevelt tries the old "hey, look at my stamp collection" gambit. Before long though, she's a fixture of the Roosevelt home away from the White House. Spending season after season there. Eventually things get a bit naughty and/or creepy between the two.  Anyways … after some time the King and Queen come to visit – some cultural clashes which are vaguely amusing ensue, the royal couple are uncomfortable while the press is tame enough to ignore FDR's polio, his multiple mistresses and the chance to photograph the King of England in a bathing suite. Eventually hot dogs are served and democracy is saved.

The picture certainly looks lovely with lush recreations of FDR's private estate. The film isn't really unpleasant to watch, and there's enough mild humor to hold one's interest … to an extent. Quite a few of the actors work hard attempting to flesh out a less than enthralling concept. It's just hard at the end not to feel things would have been much more interesting with lots less Daisy and more presidential/royals action. Bill Murray may be thinking he picked the wrong year to go for the Academy Award by playing a famous president in makeup. There's some truth to that, as Lincoln and Daniel Day Lewis is going to be tough to beat. But even if Murray manages to sneak in via the supporting actor category he's truly handicapped by a less than interesting script. A shame really, as the best parts shine bright. If you're just seeing it to get out of the rain – remember that and at least stick things through to that middle section where everyone suddenly seems to come to life. After that, it's fine to follow one's instincts even if they take you to an early dinner before the picture is officially over.

Apparently Hyde Park on Hudson is rated R – which makes no sense at all. I'm not sure anyone under 17 is going to want to see it. But still … It's absolutely mystifying what the MPAA saw as inappropriate for younger viewers. Unless they think they're going to hurt themselves laughing as we watch a car bobbing gently from afar after Murray places Linney's hand on his fully clothed thigh.