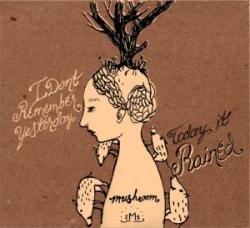 I don't remember yesterday. Today it rained is bringing the freak to the folk-rock scene here, being more an album that Wilco would have bought a decade ago to rip off ideas than sounding like a band that wants to look cool in thrift store work clothes but still get big buck prime time airplay. Thus I'm following Mimi's lead the other day with her love for Thurston's recent solo album by frothing up my love for this set. That's right, TIG kids: Skronk and soda is the new stew.

Thomas goes back to the 80s, drumming in trip-friendly new wave bands like Absolute Grey, contemporaneous with bands like the Dream Syndicate. For garage bop pedigree, Mushroom once recorded an album of 1960s covers with Sister Double Happiness lead vocalist Gary Floyd, worked with the Mommyheads' Michael Holt, and recorded this at a Mission District hardcore club with first-time-with-new-bass player Jeff Palmer (who was in both those legendary bands, as well as working with Pell Mell's Greg Freeman in Checksum). This is all what skronk was outside the Seattle scene, kids, but that is the red-headed hipster half-brother to grunge, so know it. This night also had American Music Club contributing horn-man Marc Capelle, Carroll Ashby (trombone from a 1999 Mushroom European tour), on sax Erik Pearson (band co-founder), John Sanders on keyboards, and including Jolie Holland percussionist Dave Mihaly. It's that rhythm section that keeps it all on bold shuffle though, which makes all the bleets and sweet noodling float by like painkillers in a whiskey.

Why should you, the Seattle-based indie rock soldier, want to join up with something that sounds like what Lou Reed listens to with Laurie Anderson when they hit the basement clubs in the Village after some time travel back to a perfect year when a comedown felt great in a hot soapy shower because there was warm skin in the claw-foot tub with you? Song fans have to have the jams too, the primordial cave of creation that infuses the stories tunes tell, the  between being on the One, and getting lost.

Don't be afraid: This is good times music, but not afraid to take up your entire Sunday afternoon, like a good friend with some ace stories you can immediately forget the moment the resins stop glowing. Just as important as the way it pushes, pulls, pins a mermaid's arms down, and sways beneath a foamy emerald tide, is how it's all captured perfectly. This live set sounds tons better than most of the recent labored-over CDs you've bought, for a variety of reasons having to do with musicianship, studio expertise, and road-proven character.

We're super lucky to have Thomas in Seattle now, with Fisk and 4 Zero joining forces all to give those who are burned out on underplayed buzz folk-pop groups some sizzling, free flowing, come down sounds with gravitas. Think Soft Machine's Third, or the Keith Tippet Group. Think whatever you'd like, just come join the party.

A good writer, like a clever sociopath can convince people to change their minds

A letter from my 5th grade teacher to my Mom, letting her know that I'm not living up to my potential – five yrs later, I was at a party at his house smoking a joing with him, I guess we patched things up

Blues for an airplane

I don't want to clap, it will sound too lonely