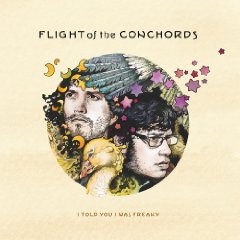 I Told You I Was Freaky

Flight of the Conchords’ second album I Told You I Was Freaky has been out for a couple of weeks, so this slightly untimely review has more to do with what to buy other people for the upcoming holidays than razor-sharp, up to the minute new release coverage. And by writing that it should be considered a stocking stuffer I am indeed saying it is not only a good idea to purchase the CD for yourself, but for those who matter to you. As long as they have a knowledge of current pop trends and a taste for well-played musical satire.

I found the second season of the New Zealand duo’s TV show on HBO better than their first: looser, friskier, and less droll. Their second album (for Sub Pop again) is not quite as stand-alone as the accompanying debut release (nothing on here quite as darling as “Robots”), but this Top 40-mocking music is more richly developed in composition as well as more specific to its targets. The playing is still crisply layered, acoustic-driven soulful pop with an indie rock smirk, but a loving smirk, for tell-tale topical titles such as “Demon Woman” (she’s really a bitch, man), “Hurt Feelings” (yes, rappers have them too), and “Sugalumps” (giving Black Eyes to some Peas).

Criticisms have been made that Bret McKenzie and Jemaine Clement are slaughtering already diseased sacred cows with solid gold instruments, perhaps putting too much creative energy into eviscerating a blissfully passed moment in the previous decade’s stampede of stupid. But when humorists love their subjects enough to revive, ravage, and re-bury with such passion, it bears (bears!) repeated listening. A good comparison in this approach might be a juxtaposition with the songs from The Mighty Boosh, an arguably equal show in love with what it mocks too, but performed with less critical thinking or finesse.

The lavish packaging, superb production, and care in the details help I Told You I Was Freaky carry an odd utterly out-of-date take on a trend (as in “Fashion”: Didn’t “Bowie” on the debut cover this?), or make up for the lack of general humor (“Robots” was righteous because you never had to see their show to get in on that joke). It’s tempting to take these guys for granted for being this gifted and for having already jumped out of the cupboard. Think of it as friends who can make the Idolator site into an Original Soundtrack, as well as an album that will certainly amuse people with just a peripheral knowledge of indie culture. Not a bad swipe all around, if you ask me.