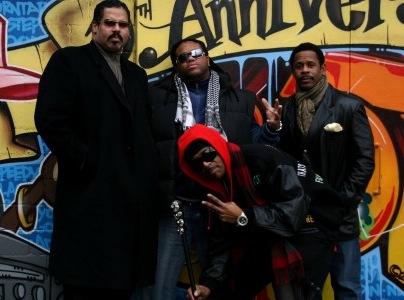 I Want My Name Back

There are times where it's hard to believe that the old school recording industry wasn't designed for the sole purpose of keeping artists from the money they'd earned. We've all heard stories of musicians battling to claim royalties or taking their "managers" to court to break free of one-sided contracts. After a few of these tales, one wonders if a film about groundbreaking musicians with a life of woe can tread new ground. And then one watches I Want My Name Back, which hits one upside the head with the truism "it can always get worse."

I Want My Name Back follows the Job like travails of The Sugar Hill Gang from 1979 to the present in what has got to be one of the craziest stories I've ever heard of the business. As a documentary, there are some significant flaws. But at a video based WTF? there's a fair amount to take away from the film. And for that I think it's worth taking a look — or at least researching the story on one's own.

The Sugar Hill Gang are three guys from NYC who in broke hip hop onto the worldwide commercial stage with the breakout hit Rapper's Delight in 1979. Long story short — they made pennies on the dollar. Sadly, trying to pry money out of one's (maybe) mobbed up producer ain't nothing new. But having people impersonate you and take legal action to claim your performing name for themselves – that takes some serious chutzpah.

If you know a lot about The Sugar Hill Gang, then this film may not be for you. It suffers some significant deficiencies, particularly in the area of audio quality. Recorded conversations and current performances are quite difficult to make out. Given these were staged/conducted for the film, it's an unfortunate gap. Most of the story is told by a former employee of the record company with one too many jumps or gimmicky visual effects for my taste. There's a lack of depth that made an emotional connection hard. But at the core, the story is so dramatically crazy (I've only hinted at some of the stuff) that much of the problems are forgivable.

Bottom line — if you like music docs or are worried about our runaway intellectual property laws stifling national innovation, then I Want My Name Back should go on your IMDB watch list. Or better yet, hit the Northwest Film Forum today or tomorrow to see it theatrically.