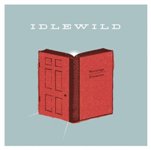 Scottish band Idlewild will be in Seattle on September 30th at Neumo's. With each performance here, there seems to be a growing mutual love between the band and our fair city. The band's sound seems perfect for rented rooms overlooking the back alleys off the Ave on a rainy day, when you have no place to be (but that's not necessarily a good thing).

The band's new album Warnings/Promises just came out and it's a very consistently autumnal affair; an ennui-stricken, emotionally-restrained twelve song cycle about the push and pull in human relationships — how what seems lovely can be pendant in destruction as well.

It was recorded with Beck and Air producer Tony Hoffer this summer, giving it plenty of high-ceiling mansion-space for Roddy Woomble's moody, sort-of Brian Molko-cum-Michael Stipe vocals, resiliently supported by the meaty-n-occasionally dissonant dual guitars of Rod Jones and Allan Stewart. (The weird but still rhythmic beginnings of album centerpieces "I Want A Warning" and "the Space Between All Things" are beautifully captured, screw-lushly opening the scene for Woomble's romantic-despair storytelling.) This trip to California allowed the boys fun in the sunshine as they recorded Warnings/Promises, but the boys brought along plenty of the brooding they must do in the UK highlands to make this a soundtrack for a studio apartment rented after a particularly sudden and slashing break-up.

"As you pull your yellow-stained fingers through unkempt hair / (you're) stranger than even Los Angeles," Woomble sings in "The Space Between All Things," and it makes one wonder if his time in LA hadn't inspired some of his confessions as well. "It's like a theater where they never ask you to leave," he observes, in the middle of his emptiness, an emptiness he never ceases to remind you of ("an empty house almost filled up with hope," emphasis on 'almost').

Ultimately, the overall feeling of the full-length is more warning than promise. "You're protected by the smoke from your cigarette," Woomble sings in "As If I Hadn't Slept," and I can't help feeling the same way about this collection of songs — he's describing a human he experiences who feels like a shadow, and the consistently depressing tone of Warnings/Promises tends to blow past me the same way. I get a good drag of its grey intelligence into me, so the anxiety of the moment is erased, but I'm not sure how much of a habit I'd want to make it.