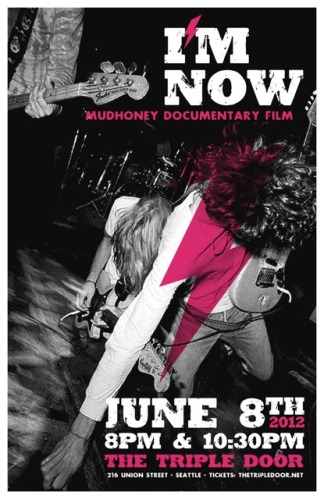 Unlike so many of the great grunge granddaddies, Mudhoney have never had a reunion. That’s because they never broke up. Mudhoney just kept fighting the fuzzed-out good fight against all things slickly packaged and highly marketable. It’s kind of appropriate that Mudhoney, the O.G. Seattle band that has managed to survive mostly under the radar for the last twenty years, would have a documentary made about them by a local production company, and it would practically be a secret.

But a movie like this should be seen, so we’re going to spill the beans and let you all in on it. King of Hearts Productions (the same ones who made the documentary Tad: Busted Circuits and Ringing Ears in 2008) is premiering I’m Now tonight at the Triple Door. We haven’t seen it yet, but it’s supposed to be a comprehensive view of the band’s history, no small feat considering all the side projects and – what is the plural for hiatus anyway? I’m Now, named for a track off Mudhoney’s latest album, The Lucky Ones, promises interviews with a who’s who of Seattle music, including members of Pearl Jam, Soundgarden, and Tad.

Right now there are no other screenings scheduled, so if you are at all interested in seeing Mudhoney The Movie, best head to the Triple Door tonight. If you’re still on the fence, check out the trailer below.