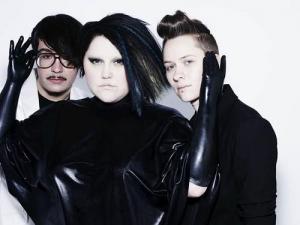 Immediately after their triumphant set at the Capitol Hill Block Party last month, I checked Twitter to see if my friends had the same reaction to Gossip’s set as I did. The comments were buzzing, referring the lead singer Beth Ditto as a force of nature and raving about the dance party the band created while on stage.

What makes this band so special, though, is the combination of their sound with their message. Ditto is a lesbian, feminist and overweight and has been outspoken for body acceptance issues and feminist causes. It never sounds preachy because band’s sound is so accessible with danceable beats and a punk ethos, held together by Ditto’s commanding voice. She sounds like a soul singer leading a punk band. The sound is filled out by Nathan Howdeshell (aka Brace Paine) filling in the guitar, bass and synth parts and drummer Hannah Blilie, formerly of the aesthetically and ideologically similar band Shoplifting.

Gossip just released their excellent dance punk album Music for Men on Columbia Records, working with producer Rick Rubin, one of the most well-known people in the music business. That raised a few eyebrows, with Gossip known for their punk, DIY aesthetic and Rubin being the ultimate music insider. Still, the result is a great album that continues Gossip’s sound while reaching a broader audience of new Gossip fans.

I spoke with Nathan Howdeshell by phone about the album, being a punk band on a major label and their upcoming tour, which includes a stop in Seattle at the Showbox at the Market on October 23. When he told me about the tour he wanted to put together next, I wasn’t kidding when I said I want to quit my job and follow that tour across the country (or world).

I really loved the set you played in Seattle last month at the Capitol Hill Block Party.

Oh that was so much fun! That was a great show.

How is your summer going?

It’s been fun, we’ve been touring a lot; we’ve been in Europe a lot. We’ve been working on getting the record tight live and learning the songs and figuring out the live environment.

Was it right that Beth said that was the first US show you had played in about two years?

Yeah, we hadn’t played in America for a long time. We had been recording and then we had gone to Europe a lot because we get a lot of offers and the shows are always great, so that takes up a lot of our time. But I am really excited to be playing America again, I love it.

I’m really excited for the tour. You’re playing at the Showbox in Seattle (On October 23).

Yeah, and we’re touring with that band MEN, which is JD (Samson) from Le Tigre’s new band.

I interviewed JD about a month or so ago and she’s really fantastic.

She told me that she really got a kick out her band being named MEN and you named your album Music for Men.

I know; it’s a perfect marriage.

I remember seeing you guys play for many, many years, often in smaller clubs. Is it an unusual jump for you to be playing much bigger shows and being on the cover of magazines?

Is it unusual? It’s a little bit. We’re really good at letting the press do its own thing. If we thought about it a lot, it would be weird. I think we just try to let it flow naturally. We’ve been a band for so long, so it’s slowly built up. A lot of bands only had a 7” out and were already on the cover of the NME and I could see how that could be really weird. But for us, it’s been a steady build, so it’s been pretty natural.

Was the point where you’re at now, where you wanted Gossip to move towards? I’ve always seen your band as very DIY and punk. I don’t think those ideas are mutually exclusive…

We never strived for that, it just happened. We lived in Olympia and were on Kill Rock Stars and that’s not a scene where anyone starts a band with the idea to be successful; it just happens and you can ride the wave and have fun with it.

You moved from Arkansas to Olympia…and then to Portland, right?

Yeah, Arkansas and then to Olympia. When we were in high school we were all in to Kill Rock Stars, K Records and I struck up pen pal (friendships) with people who worked there and in Arkansas we lived in this shitty farm town where there was no one else. It was scary to go to New York or LA and Olympia seemed like it would be small enough and would be a cool change that wasn’t too dramatic.

There is such a great roster of bands that have come from Olympia as well.

You’re a fan of all that stuff too? I love it. That was the best scene in the world during the 1990s: Unwound, Sleater-Kinney, The Frumpies, Huggy Bear.

Yeah, Bikini Kill. That was the best thing about the nineties, in my opinion.

It’s funny because I grew up not too far from there, in Aberdeen, and had no idea what was going on until after I moved to Seattle in my twenties and was blown away at my first Sleater-Kinney show.

You know we’re trying to get them (Sleater-Kinney) back together.

I’m trying to talk them in to it. We’re trying to set up a tour that would be us, Le Tigre and Sleater-Kinney. Wouldn’t that be so much fun?

I want to quit my job and follow that tour, should it ever happen.

Yeah, come along! We’re working on it. I’ll let you know.

It was great. Rick is such a sweetheart. He’s cool because he is not what you’d expect. He’s still mystical and weird but he’s a music man. A lot of people don’t know this but he comes from a super-punk background as well. He used to be in a punk band and tour with Negative Approach and Necros and all those Touch and Go bands. He’s really about suppressing the ego and being music first. He’s also all about artistic integrity and writing songs because you love it. Not letting record labels or worrying whether or not something is going to be a hit or not come into the picture. It’s really amazing that he works with a lot of these mainstream artists and does that. He just believes that “let’s just make this record and make it the best you can and work on it until you’re happy with it”. I really respect that.

How did you meet up with him?

He came to one of our shows and really liked it. He said “your band is like a party, live” and then he wanted to work on the record and we said “of course”.

Is there anything you’re looking forward to on this tour?

I’m really excited to be playing with MEN. That’s one the things that keeps you sane, touring with your friends. That’s what keeps it being fun. It’s our first American tour in a long time. I think it’s going to be really great.

Were you pretty nervous putting out this record, being on a major label?

No, not at all. We’ve been on Kill Rock Stars for ten years and we wanted to mix it up and do something different and see what happens. It’s good for a band to be on a major if you’re an artist and you have something to say and you know what you’re doing. If the label lets you have creative control, which we have, then being on a major label is great, or could be great. If you’re a young band with a lot of people around you telling you what to do and you don’t want to do it, then I think it could be a bad idea.

We’re really happy with the album, so we aren’t nervous at all. If we weren’t happy with it, we might be nervous, but that’s the most important thing to us: making a record we were all happy with.

I’ve always thought that Gossip has a lot of important things to say that a lot of people would benefit hearing. It may be tougher to get out that message on Kill Rock Stars, or on another big indie label.

I’m glad you noticed that. I think that’s one of the most important things to us. Realizing that a lot of fans are young music kids that are weirdos. I remember being in Arkansas and seeing Nirvana on MTV talking about The Raincoats and Devo and having to find out who those bands are. I think those moments in pop culture are really powerful and hopefully that something like that can happen with us. Not being like Nirvana but having that kind of inspiration on someone.