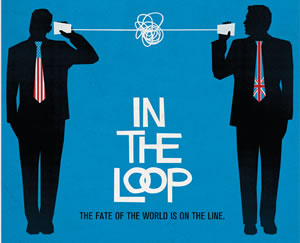 Imaginary Interview: In the Loop with Mimi Kennedy & Anna Chlumsky

Armando Iannucci’s wry political comedy In the Loop started off The 35th Seattle International Film Festival this year and opens in Seattle this Friday, July 31st.

The ensemble cast had many great performances, but I was most drawn to the female duo of Mimi Kennedy as Karen Clarke and Anna Chlumsky as her assistant, Liza Weld. I was able to grab a few minutes with both of them during the festival to talk to them about the experience of making this film.

So I wanted to interview you two because I thought that your relationship in the film was so hilarious.

Anna Chlumsky: Thank you, we did too.

Like, the little eye roll when Karen said her teeth were hurting, it was so real. I just felt like I already knew the characters.

I read that Ianuucci does a lot of improvisation. Was this mostly improv? Or was it scripted at all?

Anna: It’s a lot [of improv]. They do it scripted first – which is awesome, because you get the story in, and you have all this brilliant writing in there. Brilliant writing! You can’t get better than that. And then, he comes by and says “should we muddy it up a little?” and then that’s what you do.

Mimi: What’s really improvised in the way – I mean, we did a lot of improvised lines, but it’s really in the rhythm of your relationships. So it’s interesting. What you’re saying, is what we created – which is, how would we say it? And we fell into some great stuff.

Anna; Right, right. It just loosens it all up and dirties it up and…

Mimi: Your mother, for instance.

Anna: What? My mother?

Mimi: You told me at some point that it’s like mother/daughter stuff.

Mimi: and for me, too – it was like my daughter.

Mimi: Yeah, whether we’re taking care of each other or trying to undermine each other.

Right. And then, I wanted to ask you about the PWPIPP? How do you say that? P-whip-pip?

How did you guys not just die laughing every time you said that?

Mimi: She had to say it more than I did.

Anna: Yeah, I definitely did. But, well – I think that’s just as good a question to ask the people in the state department, or in any bureaucratic environment. How they don’t just die laughing with all the acronyms that they’re given. That was actually in our audition, and I was like “oh BRILLIANT”. Thank you for bringing up the acronym plague upon our entire English language.

Mimi: Is David Rasche the one who said “Pwip-ip, what is that? Something about birds?”

Anna: Bird-calling, yeah. I think he was the one. Also, Enzo does such great delivery. He’s like “pippip”.

Mimi: I know, Enzo. He’s brilliant in this.

Well, it was just an awesome cast all-around. It just looked like you guys had so much fun.

Anna: We did! It was ridiculous.

And it really comes across. It’s not stilted at all – the delivery is very natural. It’s like you guys were actually in DC, doing these jobs.

Anna: OH my god. And the set department was so great.

Mimi: They way they set up the UN.

Anna: And that’s really – the way they did it too: they didn’t set up marks! They just did it…what they call it these days, Guerilla style?

Anna: Yeah – that’s what they did. And so, you’re free to go anywhere you feel like going, and it’s completely impulsive. Even when you’re on lines – it’s just so impulsive.

That is so cool. And then your scenes with James Gandolfini of course. Just hilarious, with your underscore of romance.

What did he say later on about it? In the film?

Both in unison: And I don’t even remember it!!! (laughter)

Mimi: That is a very funny line.

My heart actually broke a little bit for you when he said that.

Mimi: Oh god yes. We had originally stumbled onto that in my office during an improvisation. And I brought it up and could see that he didn’t remember that. So I said Never mind, forget it –it was a mistake, I shouldn’t have brought it up. So that was there, but not in the movie.

But I have to recall now, that when I met James. I brought up something that I thought he was part of that I had been part of – you know, way back when, that we wouldn’t have even met each other on, and he was going “No. no. I wasn’t there”. And then I started to blush, because he was this big, huge star of an actor. So he laughed and said “Well I’m glad I could make you blush within 3 minutes of meeting you” And I think that now – I look back and think that that’s probably fed into that.

Mimi; Of course. Because it comes into everything actors do together.

That’s so cool. Well, I’m so glad this movie came here to play at SIFF – and thank you so much for giving me a couple of minutes.

Anna: We’re so glad to be here too.

Mimi: Thank you so much for having us!