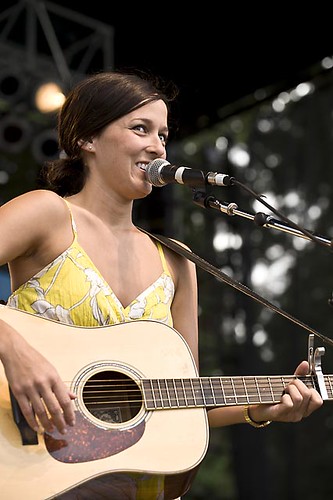 Meiko is a lovely, young singer-songwriter from Los Angeles who has quickly built a following over the past few years, mostly on the strength of her excellent self-titled album – but being really good at Twitter hasn’t hurt, either. She has a gorgeous voice that fits well over her sparse instrumentation, mostly from her acoustic guitar.

Her last show in the Pacific Northwest had her wowing the large crowd at the Mountain Acoustic Music Festival at Marymoor Park in Redmond, which she said was the largest crowd she’s played to date. This winter, she’ll begin recording her highly-anticipated follow-up record. Next month, she’ll begin a tour of the east coast, opening on Jewel’s next tour.

I spoke with Meiko by phone about songwriting, touring, and the benefits of social networking.

This interview was originally going to happen a few weeks ago, when you were in Seattle (actually Redmond) for the KMTT Mountain Acoustic Music Festival, so my first question would have been a lot more timely, which was if you found out how many free samples of ice cream you could get without being a dick.

Oh yeah. (laughs) I think it’s two; I think that was the answer.

I’m glad you answered that because I had always wondered that, too. Anyway, are you working on a follow-up record now?

I am. I’m putting all of the songs together, on a list to get recorded. I have about five or six songs recorded, demoed out, and hopefully I’ll be in the studio in November and December recording.

Is it also going to be put out on MySpace Records?

Do you have quite a few songs already written?

Yeah, I have a lot written.

How much of the songs you write are autobiographical?

All of them. It’s hard for me to write about stuff I don’t know about, so I’m either writing about things I’m going through or things I wish I was going through, but it’s definitely stuff that’s coming from me. 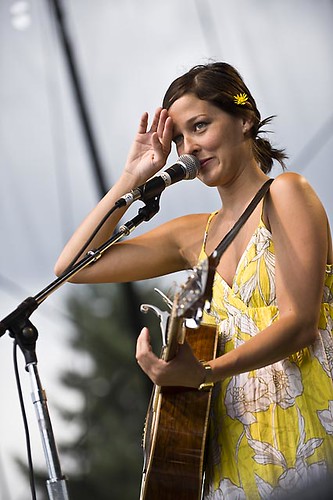 My favorite song of yours is “Boys with Girlfriends”. Can you go into a bit of detail about the inspiration behind that song?

The inspiration was that I was really good friends with this guy and he had a crazy girlfriend, who had gotten in the way a lot, and she had gotten really jealous that we were friends. I gave him an ultimatum that he would either be with her or stay friends with me and eventually he stopped returning my calls.

You’ve been on tour for most of this year, without a break, or barely any time off.

Is there anything in particular that you are looking forward to on this upcoming tour with Jewel?

I’m looking forward to watching her. I’ve never seen her live, but I’ve always have been a fan. It’ll be great to see what her stage presence is like. I’ve listened to her a lot, so I know her voice is right on and I know her guitar-playing is right on, so [I’m looking forward to] just to see it from a VIP perspective, because I’ll be on the side-stage watching her. I don’t know how much we’re going to hang out but I’m excited to see how she rolls and what her life is like. 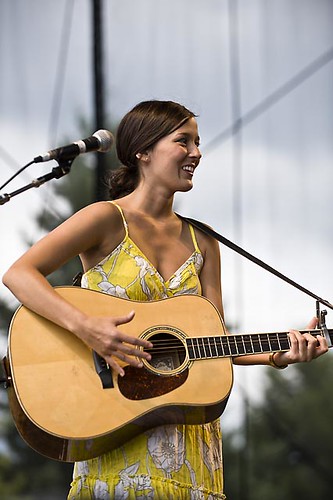 I really loved seeing you play at the Mountain Acoustic Music Festival last month at Marymoor Park. Did you enjoy playing that show with David Gray, Ingrid Michaelson, etc?

Oh yeah, it was amazing. I think it was the largest crowd I’ve ever played for. It was cool because I love Seattle anyway and I love that station, The Mountain (103.7 KMTT), but seeing that crowd and seeing how much support everyone gets was really cool.

When did you decide that you wanted to become a musician?

It wasn’t really a choice, I just did it. I grew up in a very musical household, my dad plays guitar and sings, and I just grew up around it, like it was in my blood. As a middle-schooler, I just started learning to play guitar and it just made sense. The whole time I was playing guitar and writing songs, I was still trying to figure out what I wanted to do and what I wanted to go to college for. It eventually clicked and I realized I wanted to do this for a living.

I don’t know if anyone has told you this before, and I totally mean it, but you are the funniest person I follow on Twitter.

What I wanted to ask though, was how important social media is to you right now. Your first record was put out by MySpace Records, for example. You’re also on Twitter a lot and really great at it.

I think it’s really important. It’s one of the most important tools that I’m lucky to have in this day and age; we have progressed to the point where you can reach out to your fans and let people know more about you than just your records. It’s been really cool communicating with people that appreciate music and appreciate your music. I wish something like Twitter or MySpace were around when I was younger because I would have loved to have known everything there is to know about the people I enjoy listening to. I’m really curious as to what is going to happen in the future and how much more it is going to grow.

I didn’t write the setlist down when I saw you last month, so I don’t remember if you were played any new songs, but have you added new songs to your setlist? What kind of reaction have you gotten to them?

Yeah, it’s hard for me to play a show without throwing in a couple of new songs, but I have been getting really good reactions. There are a few songs that have taken me a really long time to get recorded and people are asking me “when are you going to put this song out?” I’m really excited about the next record because all of these songs that I have been playing live while people are getting pissed because they can’t buy them off of iTunes. They’re finally going to be able to.

Are there any artists that you really want to collaborate with or tour with?

I don’t know; there’s a lot of really great people out there that I think would be a great match. Jason Mraz is awesome. I don’t really know because I don’t really think about collaborating with people much. Not that I’m against it but it’s kind of a rare thing for singer-songwriters to do, so when they do do it, it’s really awesome.

(laughs) I remember that. It was because they both play ukulele and I’ve been learning that instrument for the past couple of months, so I thought it would be funny to form a band and call ourselves “The Ukuladies”.

{All photos of Meiko by Jason Tang}