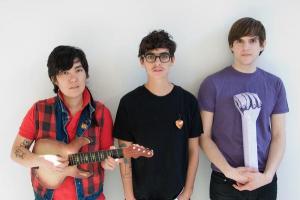 MEN is the latest project from JD Samson, a member of the electronic dance trio Le Tigre. It’s also a dance pop band with overtly political themes in songwriting. It is a natural extension of Le Tigre, who have been on hiatus since releasing their most recent album, This Island, in 2004.

MEN started out as a DJ duo between Samson and Johanna Fateman, who were Le Tigre sans Kathleen Hanna, but that project morphed into a full band, writing their own songs. The band is currently on tour, including a stop on Tuesday, July 14 at Chop Suey, with Team Gina and Your Heart Breaks. It is sure to be a queer-friendly dance party on a Tuesday night.

While making the drive from Minneapolis to Seattle, JD Samson called me to talk about her projects, including MEN, Le Tigre and working on what is sure to be my most-anticipated pop album.

You’re playing Tuesday night at Chop Suey with MEN, have you played there before?

We’re really excited to be playing there. I djed at Chop Suey a couple of years ago and it was so fun. There was such a great crowd and really great people were there.

And this show is with a couple of great bands, too.

Yeah, Team Gina is playing with us, right?

Yeah, they are really awesome.

When I was at your show at Nectar last year, it was just you and Johanna spinning records and now there is a full band. How did that evolution occur?

It was a crazy mixture of different things. Jo and I started djing together and then we started writing original music and at the same time I was writing music with my friends Ginger (Brooks Takahashi) and Michael (O’Neill) and Emily (Roysdon) and our band was called Hirsute. Johanna had gotten pregnant and her life plans changed a lot and she didn’t want to start touring. At that point we decided to combine projects and morph into one using the name MEN. So now, Emily and Johanna are collaborators but are not in the live band right now; the live band right now is myself, Ginger and Michael.

I think there are a lot of differences. I have developed a lot as a musician and a person. After we played our last tour with Le Tigre, I have been djing a lot and that has given me a better understanding of what people want to hear and what I like and what I want to give to people. Also, I feel like I’m at a place where I’m taking chances and making the music I want to make, putting it out there and creating a niche and audience.

Are you working on a record for MEN right now?

Right now we have three songs that are finished that are up on our MySpace and we’re selling those songs on tour and we made a bunch of CDs ourselves and printed them ourselves on a letter press; that was really fun. We’re going to sell them that way and then in a couple of weeks we’re going to put them up on iTunes. We thought that was how we wanted to start things off and soon enough we will record our full-length and put it out there, as well. We have enough songs for a record; we just haven’t had time to record them because we’ve been on tour so much. I think that’s a good thing.

How did you meet up with your bandmates in MEN?

They are friends of mine from the queer arts scene in New York; we started the project as a friendship project, we didn’t have any plans for it to continue to what it is now. It was a bunch of exciting moments for us and we grew as friends.

I was also curious as to how the name MEN came about, because it’s coincidental that The Gossip’s new album is called Music for Men.

I know; it’s pretty funny. I texted them when I saw the name of that record and said “oh my God, your record is called Music for Men and they were laughing really hard. We really shocked when we saw that, obviously, but “Men” isn’t referring to us, it’s for the other kind of “men”.

The name started when Jo was telling me her new philosophy of sticking up for herself instead of apologizing and it was asking herself “what would a man do?” when she thought she wasn’t taking care of herself, I guess. So, the name started as a philosophy of trying to make sure that we were treated well as musicians and as artists. From there we treated it as a way to exclaim “what is a man like?” We’re redefining that and no one really has any answers and no boundaries have been set before. There was duality in the gender spectrum that doesn’t exist anymore, so we can call ourselves MEN.

Plans for after this tour? Find the time to record the MEN album?

After this tour, we’re going to take a few weeks off and then go record the songs that haven’t been recorded yet and then we hope to have a record out in the spring. We have plenty of songs, we just need to have enough time with us all in one place.

What are your immediate plans after you finish this west coast tour later this week?

We just came from Minneapolis and had an amazing show there last night, probably our best US show because people were so stoked and took their clothes and it was like a super-gay, freedom party and the sound was really great. We ended up having a really great time and now we’re driving to Seattle and have two days to get there (for Tuesday night’s show at Chop Suey) and then we go down the west coast and through the south and back home to New York. We’re going to hit Austin and New Orleans and a few other shows after the west coast. In the fall, we’re doing a tour with The Gossip and then we’re going to do a tour with Peaches, so we’re very, very excited to do those tours with our friends.

I hope at least one of those tours will include a show in Seattle.

The Gossip tour will include a stop in Seattle.

One thing off-topic, I think I read on Pitchfork that Le Tigre is collaborating with Christina Aguilera on her next album. Is that right? With you guys being involved, as well as Ladytron and Goldfrapp, I don’t think I’ve ever been quite so excited about a bubblegum pop record before, and that’s a genre that I really love.

Yeah, she picked a lot of really awesome people to work on her record and she is an awesome person and a really hard worker and I really respect her music a lot. We’ve been working with her a little bit and it’s been really awesome. She’s really a talented artist and we think it makes sense for her to work with other women making interesting music and art. I think they’re really good decisions that she’s made with who to collaborate with on that record.