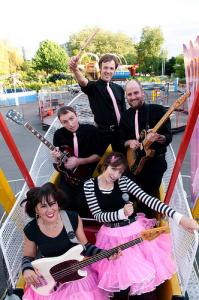 When you visit The Not-Its website, it promises that “if you’ve never seen us before, be prepared to jump around – it’s guaranteed to be your first rock and roll experience”.

The Not-Its was formed because the members of the band wanted to continue making music after the started their own families, even if the typical musician’s schedule conflicted greatly with their family life. The result is a band that makes some very catchy, fun, upbeat pop-rock music that is for children and their parents. They will be playing Bumbershoot this year as part of the “Youngershoot” program, with their set being on Saturday, September 5 at 1:30pm on the Northwest Court Stage.

I talked with Not Its Sarah, Norea and Danny at Sarah’s lovely North Seattle home, where we discussed the band, writing children’s music and why being a rock star and a parent are not mutually exclusive ideas.

Everyone in The Not-Its was in a band previously. Of course, I know a lot about Sarah’s previous band, Velocity Girl, and her solo work but can you guys talk about your other bands?

Danny Adamson: Tom (Baisden), who plays lead guitar, was in a band on the East coast called Action Patrol. I know this because the band I was in went to play a show with a band called Avail, do you remember them? And Action Patrol and the kids in Richmond, Virginia were freaking out more for Action Patrol than they were for Avail. Now he’s in a band called Mostly Dimes – where they play folk music about genocide. It’s very unique, I’ll say that.

Nice! The Not-Its and a folk band that sings about genocide.

Danny: Mike (Bayer, drums), has been in tons of smaller bands in the past. Right now, he’s in a band called Amateur Radio Operator and another one, Black Whales. The bands I was in were stupid small bands but the one most “of note” was Kentucky Pistol and it had Rocky Votolato in it. He actually played drums; that was the last thing he did before his solo stuff.

Norea Hoeft: I mostly did solo stuff and I was in a band called Servo, where the drummer and bass player went on to be in Aveo.

How did you get together and form The Not-Its?

Sarah Shannon: The actual impetus came from my label, Minty Fresh, who put out my solo stuff, and I was pregnant with my second kid and I was trying to figure out what I wanted to do. I wanted to keep making music but it was really hard to find time to do “grown-up stuff” and play bars and the schedule is really different because you have to play later shows and they suggested a kid’s band.

Danny: Didn’t they suggest a kid’s album, not a kid’s band?

Sarah: That’s true. They suggested a kid’s album and I started talking with Danny and Danny just took the reins and was really excited about it and started putting it together.

Danny: It was this very loosely-connected group. Sarah kind of knew Mike, the drummer a little bit, too because he might have played on your solo record, which I suggested.

Nori: And Mike and I figured out that we had actually played a show together long ago at someone’s house.

Danny: It was one of those things that if Sarah was just doing it herself, there was no way in hell that she would have called Nori or Mike; Tom or I, maybe.

Sarah: A lot of is that I’m really close friends with Danny’s wife Rebecca and Tom’s wife. Tom is our guitar player. I see them every week.

Danny: And to take it another step, we always kind of jokingly said “we should start a kid’s band and call it ‘The Playgroup’ or something”. We didn’t really know what we would do with it, so that hand was never really forced until Sarah brought that up and then we just said “let’s go for it”.

How do you write songs together?

Nori: We usually do it individually. Someone comes in with a song and we learn the basic structure and maybe tweak it a little bit.

Danny: It’s kind of weird because historically, when I’ve played in bands, what we are missing in this band because we all have families, is…

Sarah: Except for Mike.

Danny: …Our time is very limited, so what we lack is the “jam time” where everyone is farting around with music.

Sarah: I can’t say if that is better or worse, but I like it this way.

How often do you play shows?

Sarah: We’ve been playing a lot this summer, almost every weekend.

Danny: Twice last Saturday. Last summer we had just been a band for about a month or two, when summer started, so this is basically our first really summer, with an album and everything. I think this has been the time to strike because that’s when kid’s bands play.

Nori: There’s been a lot of outdoor, family festivals or events.

Danny: It’s a weird position to be in because it’s the first band I’ve been in where I’m not calling clubs and asking “can we play? Please?” It was like that six months ago.

Nori: But now where having to turn people down sometimes. That’s new for me, too.

Are clubs also trying to book you?

Sarah: Vera is probably the closest.

Danny: And they’re not really asking us, they’re allowing us to play there because it’s icing on the cake for them because it can happen on the same day that they have another show because our show happens at noon or one o’clock.

Right, I think I read a quote from someone in the band who said that previously you were playing shows at 2am and now you are playing them at 2pm.

Nori: It meshes a lot better with our current lifestyle.

Nori: We’ve had some conversations about what a tour would look like, like if we could even do that. How would that be? Would we take our families? Would they meet us? Would we go out for long weekends? It would definitely be different than saying “hey, we’re going to be touring for the next three months”; that’s just not possible.

One of the reasons I wanted to do this interview was because a lot of my friends are having kids and starting families and they say that they want their kids to be exposed to music other than Radio Disney.

Nori: That was definitely an impetus for doing this. There’s some good music for kids out there, but there’s not a lot; definitely a lot less than music for the general, grown-up public. I think the flip-side is that a lot of people can say “my kid can listen to The Beatles” but a lot of their music has grown-up themes, romantic love.

Sarah: Sex and drugs and rock and roll.

Danny: For me, the songs that I write are pretty much exactly the same things I was writing about in pop-punk bands or indie bands, just with different lyrics. In my opinion, as far as a parent wanting some music for their kids, this is music with cool guitar parts or cool drum parts; it hasn’t been vanilla-ized.

Just this afternoon I was listening to some music online and thought “this is really catchy”. I love catchy pop music as it is, but I mostly pay attention to the melody and the beat and hooks. With The Not-Its, it doesn’t seem to be “just” kids music, either.

Nori: We were hoping to make some music that when a kid asks for it over and over again it wouldn’t drive their parents crazy. That tends to happen when kids get into something and they want to hear it again and again. If you don’t like it, that is a recipe for insanity.

Sarah: We started apologizing to parents when they say their kids can’t get enough of it and I like when we hear “no, I actually like it, too.”

Danny: The way it pretty much works on a ten-song CD is that you pretty much listen to the first four songs over and over again. For example, if you’re going to Fred Meyer, that’s two songs away.

What do you have coming up, beyond Bumbershoot, once the summer winds down?

Sarah: We don’t have as many shows booked, but I don’t see why we would slow down if stuff comes up.

Danny: It is starting to fill up again, we’re booked into October now.

Nori: We’re doing an in-store at Alphabet Soup (on September 26, at noon).

Danny: We need to because we haven’t been because we’ve been busy in the summer.

Nori: In the kids music market, I think things turn over a lot more quickly. You can really release a new record every six months or a year and it would be fine.

Sarah: I’m sure Danny has an arsenal of songs.

Danny: A lot of half-songs.

But I’m sure you can flesh those out and complete the songs.

Danny: I’ll say that for me, that’s the best part of writing kids music, that when I was writing “grown-up music”, for lack of a better term, I was always asking “what should this song be about to make it meaningful and people aren’t going to laugh at?”

Sarah: I’m spilling out my soul!

Nori: That’s not our crowd now. Our crowd now says “tell us what to do! We’ll do anything! We’ll just up and down, we’ll spin around in circles, we’ll pretend to be animals”. It is a fun crowd to play to.

Sarah: I’ve said this before but this is definitely the most joyful music project I’ve ever been in. The content of the music is pretty upbeat but the content of the lyrics and just playing for small children is just very joyful. Not to be too Pollyanna or whatever, about it, but it’s just really fun.