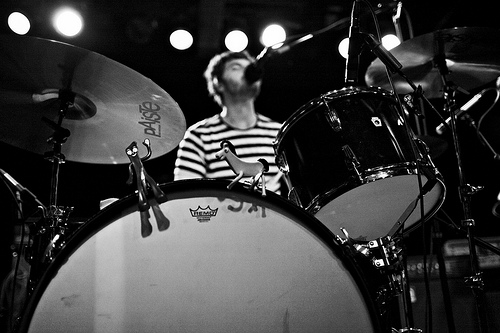 The first time I heard Michael Benjamin Lerner live was in the incarnation of the band that played the 2008 Imaginary Holiday Spectacular at Chop Suey. (And no, I’m not just saying that because this is the lead to an interview for Three Imaginary Girls.) It’s the only time I can recall in recent memory that the sound of a band made me stop what I was doing, leave a conversation with a legit famous person — at the time, John Roderick — and go into the other room to see what the haps was. Turns out, it was a little band called Telekinesis, recently on my radar due to a stellar release and some pictures I saw on the ‘nets by the uber-talented Sarah Jurado. The band was catchy, tight, and infectious. Hence my love for Telekinesis was born, and “Coast of Carolina” has made an appearance on practically every mix I’ve made for friends looking for new music to dig on since.

Being the lucky gal I am, I was able to see that incarnation of Telekinesis again, when Michael filled in on percussion for a pseudo-Long Winters gig at the Sunset, and then played full-band later on in the night. Between living in our fair city and taking the trek out to Sasquatch! last year, I was able to catch a few more glimpses of the good that Telekinesis is capable of, all the way up to (and including) the work of his newest release, 12 Desperate Straight Lines. He’ll be making his noise unto the masses again shortly as he tours behind 12DSL, and we caught up with him last week to talk about his chosen craft, what he’s listening to, recording with Chris Walla, and other indoor sports.

{Find our more about the new Telekinesis album here. MBL photo by none other than the de-lovely Sarah Jurado.}