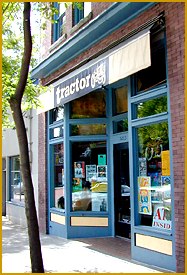 For more than fifteen years, the Tractor Tavern has been an institution on Ballard Avenue, and with its friendly atmosphere that is free of pretension, has provided one of the most comfortable places to see a show and has booked some excellent shows throughout its history, with artists like Drive-By Truckers and Neko Case playing the Tractor before superstardom. Even more impressively, the club has maintained the same owner from over that time, giving it the greatest longevity in Seattle.

The Tractor celebrates its fifteenth anniversary this week, kicking off with three nights of The Maldives starting Thursday, August 27. Thursday night’s show also features North Twin and 17th Chapter; Friday’s has The Moondoggies and Zoe Muth & the High Rollers and Saturday’s show has Shim, Thee Emergency and Pickwick.

I met up with owner Dan Cowan at the club this week to talk about the club and its storied history. For such an impressive roster of artists that have taken the stage at the Tractor, I found him remarkably modest.

When you opened the Tractor in 1993, what made you want to buy it?

Well, I had a little café up the road, where Madame K’s Pizza is now and that sort of familiarized me with the street. I had a friend who bought Conor Byrne, the old Owl, and I had an old friend who was a member of a union who owned the building and he told me that the guy who was here was going out of business and it was made available. I thought about it and thought about it and thought “ok” and after a couple restaurants, which is a really hard way to make a living, I thought about letting other people make wonderful products and charge more for them and we could do music again. I used to own part or Murphy’s Pub in Wallingford, when it was in a different location and, I don’t know, it was kind of a whim. The rent was kind of cheap then and it wasn’t quite the risk it is today, where you have to spend a ton of money to open a new business.

And after fifteen or sixteen years, you seem to be doing as well as any club in Seattle right now. I don’t think I’ve ever been to a show here that is less than half full.

Yeah, we certainly have those nights when it’s not. Things have been good, it’s just a matter of doing the right thing and making sure that the shows you have on weekends are weekend type shows and that allows us (to take more risks throughout the week). It’s been pretty steady for the past five years.

What’s the same? Hattie’s, Conor Byrne, which used to be The Owl. Not much of anything is the same. Everything else is new up to Smoke Shop, next to the Sunset.

One thing I’ve noticed in Ballard at the clubs is that you seem to have a good relationship with the other clubs. I see posters for shows at the Sunset here and vice versa.

Yeah, I’m good friends with Max (Generaux) who owns the Sunset and I helped out Conor Byrne a few years ago and did their booking. Conor is long gone but a friend of mine owns it. Those smaller clubs, like we are, are a stepping stone for larger venues. Its good when we can assist a band get a show in one of the smaller places here.

I think you also put on some shows at the High Dive, as well, right?

Greg (Garcia), who is booking here now, used to work over there and it works good.

You just mentioned you booked shows for Conor Byrne, do you also book shows here, or do you leave that to Greg exclusively?

I did that for about eleven or twelve years and then I hired Andrew McKeag and he used to be down at the Triple Door and was at EMP for a while when they first opened. I think he worked here for just over a year. Then I hired Greg, who I had been talking with for years and it has worked out great because he knows more of the local scene with local bands. We’ve done more local bands on three band nights part because the Triple Door took part of (what we did) away. In the 1990s we used to have more seated shows and concert type shows and more rocking nights on the weekends, but that’s clearly evolved over the past fifteen years.

Was there anything that you wanted to bring to Ballard when you bought the Tractor?

Really, I didn’t know a whole lot about it other than more concert-type things, like bluegrass and Irish, Cajun, some rock bands, some folk rock. It’s like we filled a niche at the time but a lot has changed in clubs. Now you can see pretty much anything at any club. It’s not “this is a rock club”. I don’t know if that’s partly because of the internet and this is a great city, partly because of the radio stations that we have and musically, everyone seems to have broader tastes.

You really have a really broad calendar. There’s a lot of folk rock, but a band like Shim can play here all the time, as well.

We’ve developed relationships with certain bands. There are some bands that probably wouldn’t draw as well down here as they might on Capitol Hill, playing at the Comet; there’s a different clientele. But we’ve had Wanda Jackson, Ralph Stanley, and all kinds of people.

Yeah, she played here in 2002 and then took a break and then came back. The first time she played here was especially a treat. I think she hadn’t played for years and started coming back. She was doing really well in Europe. She and her husband are sweethearts and they’re still doing.

What are some of your favorite shows that have happened here?

Oh I don’t know. Built to Spill played here for a few nights. Medeski, Martin and Wood played here three nights, it was a quiet thing; years ago we did this show with The Copper Family, which was this British family of four generations singing traditional, British folk songs. It was amazing. Cordelia’s Dad played here years ago; we’re really going back. John Doe from X was just here with The Sadies.

Right, he played a solo show about two weeks ago.

That was probably one my favorites, when they were semi-acoustic (in January). It was X plus Dave Alvin, The Knitters. It was just amazing. But there were so many great shows here, all over the board, musically.

When Cake played here, they played like three times. We were fairly new when they first played here and though “man, we can do anything in here”. There were like 200 people here and that was amazing for us. It wasn’t sold out, though.

The first show we ever had here was a benefit for a dog to get a hip replacement surgery. It was a band from Oklahoma and The Model Rockets and there was like five or six local bands. That was actually a sold out show, the first one to pack the place. There’s just so many shows. Gillian Welch played here once, maybe twice. It was just crazy. Sometimes you will book a band and they will get big overnight.

Look at David Gray. I was a fan of David Gray in the nineties and he had that album White Ladder, which was huge in Europe and the promoter asked me if it would do well here and I said “well, it’s got to; it’s huge in Europe, right?” That was fun (having him here). Then the next time he played here, he was somewhere huge, skipping The Showbox. I could go through the whole calendar. Whiskeytown played here with Old 97s on a No Depression tour, and that was ten or eleven years ago.

Do you get a sense of pride for having a band play here that has then taken off, say Drive-By Truckers, who used to play here quite a bit, for example?

People tend to think we’re a country bar, but we’re really not. Maybe a roots bar, with a lot of roots-oriented music, but anybody who does the research…

When I first started going to shows, I thought the Tractor was a country bar, but that was until I looked at the schedule for the first time. You have rock bands play here all the time, folk, pop, etc.

I think there was a time when bands (like that) didn’t have a place to play. They couldn’t go play at the Central. There wasn’t this alt-country scene then, well, there was, Steve Earle has been around for a long time and there was Alejandro Escovedo’s old band Rank and File. But that whole things has just opened up. David Bazan played one of the first shows with Pedro the Lion and they went on and played a lot with Damien Jurado, there was a whole movement from there.

We’re small enough and our overhead is low enough that we can open up and take a chance on shows. It’s been a fun, even on nights when there has only been thirty or forty people. It doesn’t mean the music’s not good. It’s hard to balance. It’s a great show, but there’s nobody here. How do you get people to come out and see it?

But sometimes it’s no one’s fault. Maybe there was just bad weather one night.

Right, but we had The Maldives during that big snowstorm just before Christmas; and The Moondoggies. Everybody was closed but the bands were here and we had already sold 300 tickets, so we thought “let’s open up” and people were walking up and down the street and we filled the place up and people were glowingly happy to just be somewhere. It was a super fun night.