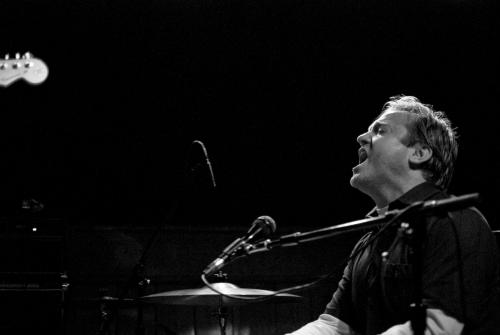 Chicago is, without a doubt, my kind of town.

Purchasing a plane ticket to spend two nights with the Wrens at Schubas may very well have been the best decision I’ve made in the last several years. The shows were mind-bogglingly wonderful, the band was both seamless and deconstructed, the sound was just right, and the energy was — well, indescribable. Prop all this adjective up against the backdrop of a venue on everyone’s short list, add in abundant sunshine and an excellent subway system, stir, and you’ve got yourself a very imaginary roadtrip.

Schubas — and the Wrens, mind you — proudly celebrated twenty years in the making by hosting back-to-back sold-out shows this past weekend. And as most people expected, the Wrens did the festivities ample justice by putting forth two nights of tremendous, sweat-soaked performances that rang out for hours and hours on end. Both sets were like Christmas, as they treated the crowd to the bulk of the Meadowlands, a few choice picks from Secaucus, and about a half-dozen new songs [!] each night — along with second and third callbacks for encores —  including “Made Enough Friends” both nights and “Surprise, Honeycomb” the second.

We were pulled up on stage for drawn-out keyboard introduction improvisations two songs in the first night, and the percussion festival from a stage full of drumsticks for “Boys, You Won’t” at Friday’s show was as orchestral and epic as ever. Both long-standing fans and Wrens-newcomers stood side-stage, mouths agape, almost unable to process the controlled chaos that came from Kevin’s rendition of “This is Not What You Had Planned” followed immediately by about ten solid minutes of cheering and applause — mind you, over the club’s post-set music coming out of the speakers, and under the glare of full-force lights — until the band finally gave up and came back to dole out another half-dozen songs to round out Saturday’s set.

While we didn’t quite have time to pull everyone together for an interview, I did manage to catch up with Jerry, Greg, Kevin, and even Charles for a quick moment over the span of both shows. On top of some adorable new shirts, I was happy to see the merch table stocked with real, record-company released albums of Secaucus, Silver, and the Five Mod Four / Wrens split EP, apparently as a result of some ax-burying with Wind-Up Records. (Those of you who have handmade, computer-burned, silkscreened cardboard case copies of these albums from purchase at shows past will know the bliss of seeing real cases — with real liner notes! — housing proper releases of these cds.)

And last, but certainly not least, on the next album: there’s no news to report as far as a definitive schedule for the upcoming release — but I can state first-hand that these guys are writing and shaping a respectable amount of new material. In the end, recording will take as long as it takes, but from what I can gather we’ll be hearing more tracks and seeing more serial weekend tours sooner rather than later. Fingers crossed for a night (or two) in Seattle!