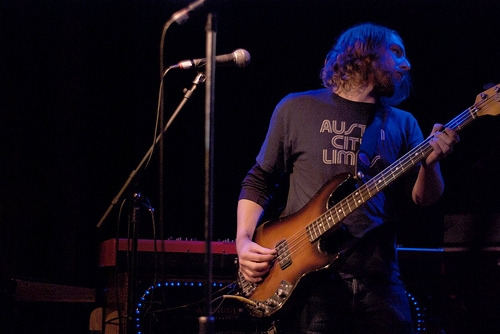 {No, neither the Long Winters nor Eric Corson will be playing at ACL this year. I just really want that shirt.}

Oppressive heat and a lack of Beastie Boys notwithstanding, I’m pretty excited to be bringing some imaginary coverage to this year’s Austin City Limits festival (October 2-4, Austin TX). The fine folks over at ACL have put together a slew of fantastic bands, not only for the festival itself but also for some open set performance tapings and excellent post-fest afterparty gigs. My last visit to Austin, which was also my first, wound up chock full o’ friendly musicians, stellar performances, and southern hospitality — and that was only for one show! I can only presume that this sparkly little Texas city will bring forth more of the same this weekend.

With color-coded schedule firmly in hand, here are just some of the acts I’m hoping to catch this year (non-negotiables are in bold):

Fresh off of geeking about the Avett Brothers’ last trip through town, I’m really looking forward to seeing these guys again. There’s this whole undercurrent that goes on when they play live that I’m really looking forward to experiencing more of. The Walkmen never disappoint, and let’s triple that sentiment for Andrew Bird — I could see him play every week and never get sick of it. And on top of all that, catching Robyn Hitchcock will serve as a nice warmup / preview to the upcoming show at the Crocodile.

Other acts of note on Friday: School of Seven Bells, Raphael Saadiq, Coheed and Cambria, Daniel Johnston, K’Naan, Theivery Corporation, Yeah Yeah Yeahs, John Legend, and Kings of Leon — many of whom I hope to catch if scheduling permits.

There’s tons of other good sets on Saturday, including Citizen Cope, DeVotchKa, Mos Def, The Decemberists, DeVotchKa, Ghostland Observatory, and Dave Matthews (and DeVotchKa). Some of these I like, some of these I loathe — there’s definitely something for everyone between all the acts and stages. Grizzly Bear and Bon Iver, neither of whom I’ve seen live, are up at the top of my list, and Deer Tick apparently killed it with close to a thirty-song set at the Tractor the other night — which is enough to put them on the “check it out” side of my schedule. Plus a side of John Vanderslice, which needs no explanation, especially since I wasn’t able to see him two weeks ago when he came through Seattle.

Sunday’s going to be a little bit busy.

I’ve loved David Garza since my first visit to Seattle, when my best friend took me to see him perform. We sat in a little below-grade room (that I now know as the Green Room at the Showbox) and I watched this wine-laden guy with his big-bodied electric just tear the room apart. He went booth by booth around the room, taking requests to make up most of the set — I fell head-over-heels in love with This Euphoria immediately following that trip, and have yet to see him play a second time. So I’m pretty psyched for his set. That + some B-52’s + more Rodriguez and Heartless Bastards = win.

On top of all that, I’m going to try and find room for Alela Diane, Arctic Monkeys, Passion Pit, Brett Dennen, the Dirty Projectors, and Dan Auerbach. And Pearl Jam, of course, if I can get anywhere near the stage — I have the feeling that show’s going to be a bit crowded.

So, stay tuned for blogs and reports live from the fest — we’re traveling without an imaginary photopass, but there will be plenty of cameraphone shots and adjectives to make up for it.