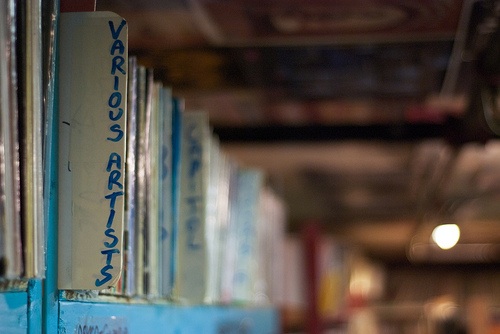 Imaginary Victoria's best of 2010, part one: seventeen new releases that knocked the stripes right off my kneesocks.

I know, I know. Writing best of 2010 lists is so three-weeks-ago. But with such a good year in music having just passed, it would be remiss of me to not to let the imaginary-sphere know about a few of my favorite close-of-the-start-of-the-oughts things. I’ve never been a big subscriber to “this is better than that” — it’s not easy to put so much different stuff on one plane and deem some of them better, some of them worse — so instead of file and rank, I’ve compiled a few chunks of albums, shows, and random happenings that made it to ‘awesome’ status for me over the last twelve months, with commentary, in no strict order.

That said, this best-of is meant to be enjoyed. Maybe your life was altered at the same show mine was, or maybe the same album had you trapped in the car for an hour listening tracks on repeat. Whichever is the case, remember one thing above all else: as John Roderick so eloquently stated earlier this week, “If you are too busy to discover new albums for yourself, the last thing you need is a list of more albums to buy. You should take a hot bath instead.”

That said, let’s start with the releases. I was seriously impressed with the amount of great EPs and LPs that came out this year, and this is coming from someone who’s held fast to the belief that there hasn’t been a ‘great’ year for new music since about 2005 or so. (Obviously, with a few onesie exceptions here and there.) Maybe it has to do with where I’m at and what I’m capable of absorbing at any given point, but seriously — I’m able to look back at what made it into my itunes from January until now, and can state with confidence that some honest-to-goodness talented shit rose to the surface above the onslaught of mediocre that is now deemed ‘indie’ and/or ‘indie rock’ these days. (PS: in most cases, there’s very little new music that can truly be deemed ‘indie rock.’ I’m just saying. When the next Wrens album comes out, we’ll talk.)

Tied for First Place:
* Lovesick Empire / The Grind EP – I simply can not get enough of this EP. It’s a sound that invokes a proper nod to grunge (which is seemingly inherent, rather than purposeful), laden with powerful big-guitar ache and smart lyrics to match. Catch them in the third-of-five spot at Neumos next Friday, January 7th before you head out to Columbia City (see below). {listen / free download}{tickets}
* Damien Jurado / Saint Bartlett – This ambitously-recorded album is a bold departure from Jurado’s previous work, with a layered, throwback, one-take sound that begs to be heard on vinyl. Wielding the CD in my car on the way home from the West Seattle Easy Street pre-release show, I found myself pulled over on John Street, listening to “Beacon Hill” about twenty times in a row — if you didn’t pick this up yet, you can grab a copy at his upcoming show on Friday, January 7th at Columbia City Theater. {buy album}{tickets}
* The Head and the Heart / (s/t) – Unless you’ve lived under a rock since about April or so, you know why this band made my best-ofs. There’s hardly enough adjective left that hasn’t already been used since this band hit my radar over the summer, and they’ve gone from the stages of Conor Byrne and Sonic Boom to opening sets for Dave and Tim’s most recent run of shows — and with good cause. If you’re lucky enough to have picked up tickets to the January 15th show at Neumos later this month (we’re including the link in case any get released between now and then), I’ll see you there! {buy album}{tickets}

Tied for first Runner-Upper:
* S / I’m Not As Good At It As You – So much emotional cutting to do, so little time: the imagery painted by Jenn Ghetto on this album takes you on a willing trip of sadness and reflection, layering the journey with just enough hope to keep you a respectable distance from the edge of the bridge. Out earlier this year on Own Records, who are kind enough to let you try before you buy over at their site. {listen / buy album}
* Pearly Gate Music / (s/t) – I love this album. Period. Having seen some live solo shows by Zach Tillman, I was a bit hesitant to give this one a listen — and that’s only because I fell head-over-heels for PGM’s full-band sound at an in-studio they did for KEXP back in 2009. Happily, the backbone of PGM translates on these tracks, deeming the self-titled 2010 release a win. {buy album}
* Nathaniel Rateliff / In Memory of Loss – One of the only non-locals on my top sock-knocker-offer list, IMoL — my first glimpse of Nathaniel Rateliff, via a birthday present this past spring — has enough heartache embedded in it to last a lifetime. It’s a wee-bit frontloaded, but still a necessary listen from start to finish. {buy album}
* Jessica Lea Mayfield / “Our Hearts Are Wrong” (single) – iTunes is up to seventy-five plays (and counting), and I still just can’t get enough of this track. Somewhat of a grower, “Our Hearts Are Wrong” gives a telltale glimpse into the evolution of Mayfield’s sound, which we’ll hear more of when the whole album drops in 2011. {listen / free download}

Tied for Almost Runner-Upper:
* Les Shelleys / All Shelleys Eve Summer 2010 Tour EP – If you do one thing today, go download “My World Is Empty Without You, Babe” from this awesome project by Tom Brosseau and Angela Correa — if you can find it, that is. Trust me. If you happened to catch them on this tour, playing the back room of Hattie’s Hat, you know the magic of which I speak.
* Amanda Palmer / Amanda Palmer Performs the Popular Hits of Radiohead On Her Magical Ukelele – Yes, I’m serious. {listen / buy album}
* Hoquiam / (s/t) – “Finish With Starting” is another one of those tracks that’s had a zillion plays (and counting) on my MacBook. Find it, get it, live it, love it. {buy album}
* Girl Talk / All Day – Please don’t take away my Seattle card for loving this release. This one’s a requirement for the anti-sadbastardry playlist, especially so when blaring that track that with the Jay-Z sample around 6:30 in the morning when you’re driving. {free download}
* The Long Winters / “Connections in Nashville” (single) – This track, coupled with the two-of-intended-three shows we were privliged enough to take in at the Triple Door this year, renews my belief that good things come to those who wait. As it stands with our friends the Wrens — no rush on the new full-length, gents. We can hold out a long time for the gold you’re sure to dish out. {buy single}

Tied for Honorable Mention:
* The Bird and the Bee / “I Can’t Go For That” (single) – Simultaneously totally pedestrian and totally brilliant. {buy album}
* Discover America / “When You Are Young” (single) – A standout track on this release produced by Michael Lerner of Telekinesis, “When You Are Young” is my new favorite mixtape staple. {buy album}
* LCD Soundsystem / This Is Happening – I’m a sucker for these guys, ever since having seen them engulf tens of thousands of fans at Sasquatch this past May. Add to the anti-sadbastardry list with the Girl Talk release mentioned above, and you’ve got yourself a good combatant for the grey skies. {buy album}
* Frightened Rabbit / The Winter of Mixed Drinks – Had I never heard the release prior to this one (Midnight Organ Fight), I might have ranked this higher on my faves list. While it pales a bit in wrist-slitting vibe and shines a little too bright on the production end, TWoMD is a great effort and shows us that yes, you can in fact heal that shattered, mangled heart. {buy album}
* Clem Snide / Suburban Field Recordings, Vol. III – Contains much in the way of rad, including a cover of the Velvet Underground’s “Pale Blue Eyes” that you’ll be using to woo every light-eyed girl this side of the Puget Sound. {buy album}

And that’s that! Stay tuned for part two, where we’ll run a highlight reel of some of the best shows, events, and (mostly) music related moments of the past year. Happy 2k11!