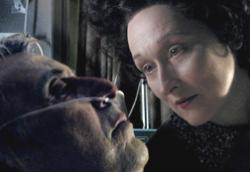 Playwright Tony Kushner won the 1993 Pulitzer Prize for Drama for his brilliant two-part play Angels in America: A Gay Fantasia on National Themes. Set in 1985, it is what its title implies: an exploration of the issues confronting our nation during the Reagan years, and at the start of the AIDS epidemic.

On 12/1/03, World AIDS Day, the Intiman co-presented a fundraiser screening of Millennium Approaches, part I of the new HBO adaptation, which will air December 7 (to be followed by part II, Perestroika, on December 14) and repeat on various dates through January. Mike Nichols directs from a script by Kushner, and a gaggle of big Hollywood stars make appearances in the film.

I was absolutely blown away, dumbfounded, mesmerized, terrified, delighted. Even knowing nothing of the conclusion, I can say with confidence that this is one of the best films of the year, and three of the best and most original hours of television I've ever seen.

And now I find myself at a loss. This is a work of art so rich with significance, so packed with plot, so fantastic and heart-wrenching and profound, that a pithy embracey review couldn't hint at even a glimmer of its luminescence. I'm reduced to offering you key points, and for this we'll return to those big Hollywood stars:

Again, this barely scratches the surface. But what more can I say? If you have HBO, don't forego this experience. If you don't have HBO, be nice to a friend who does. Angels in America simply cannot be missed.

Director Tim Burton more than makes up for his overblown Planet of the Apes remake with this exquisitely-acted and remarkably imaginative film, another of the year's best.

Edward Bloom (Albert Finney) is an infamous teller of tall-tales about his oversized life as a young man (my boyfriend Ewan McGregor). Edward manages to charm almost everyone he encounters… except for his estranged son Will (fantastic Billy Crudup), who'd already grown weary of the yacky yarns by adolescence. When his mother Sandra (Jessica Lange, doing her best work in years) tries to reunite father and son after a three-year estrangement, Will must learn how to separate fact from fiction as he comes to terms with his storytellin' daddy's true past.

The fantasy charms and delights. The drama moves me in ways I can barely fathom. (OK, so I don't live overseas… yet. And I haven't secured the Euro-mate… yet. And as much as I identify with his character, I'll never look like Billy Crudup… ever.) I'm utterly amazed at Burton's ability to separate — and, eventually, integrate — the two worlds. And by the time we reach the satisfying (but not quite expected) conclusion, Big Fish has become a moving multi-generational saga, a fascinating piece of oddball Americana.

{By the way, how happy am I that someone cast Alison Lohman as a young Jessica Lange? I made the comparison months ago. Thanks for listening, Hollywood! And thanks for the beautiful film, Tim.}

Julia Roberts stars in and co-produced this new chick-flick. It's called Mona Lisa Smile. Need you wonder what's it about?

Well, technically it's about the character Katherine Watson (Julia Roberts), a fiercely independent UC Berkeley grad who accepts a position at Wellesley, where the women are torn between the repressive values of their time (the mid-'50s) and their own keen longing for intellectual freedom.

It's also about Julia Roberts' teeth. Believe me when I tell you they are all over this movie. I'm surprised they weren't awarded an associate-producer credit.

But I really liked Mona Lisa Smile. The supporting characters (not those famous superstar chompers gleaming brilliant and big in most every scene) won me over: