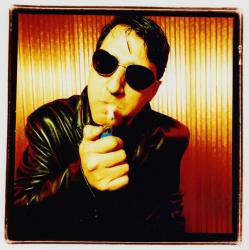 Monday night shows just don't do it for me. But for Twilight Singers, my friends were very persuasive, and since it also happened to be the last night of the quarter for me at Seattle U., I decided it'd be a great way to celebrate.

Opening act Black Angel, the Portland super-sized salt-n-pepper singing duo, was just picking up steam by the time we got in the door, delivering an interesting blend of punk-tinged soul and blues. Miss Thang Tahoe Jackson was calmly seated on a stool, with occasional storms of the truth emanating from her pipes, an unsurprising image for a diva. But the salt in the combo was definitely out of the ordinary, as J.R. Pella shivered and shaked his plumber's crack in an untucked sweatsuit, wailing out with both power and control. I don't think I've ever seen a white boy sing like that, something like the monster child of James Brown and Frank Black.

At first the rock-loving patrons were a bit hesitant to drink from the hydrant of emotion pouring out, perhaps because neither the appearance nor style of the band was what they expected. But Black Angel was not to be denied, winning over the crowd and making us believe we were in for something really special with the headliners yet to come.

If you ever find yourself in Portland on a Thursday night, and are looking for a talented band to enjoy, look up Black Angel at Dante's. They have a standing gig, except first Thursdays, called Soul Kitchen.

Former Seattleite Greg Dulli (Afghan Wigs) and his latest band Twilight Singers dashed onto the stage and got right down to work, jamming their way through most of their latest release Blackberry Belle. We learned immediately that while Dulli's vocals are not as pitch-perfect as they sound on the albums, his heart is every bit as into it as you might think. His band compensated on backing vocals, smoothing over the rough parts from Dulli's cigarette-toughened tones.

A couple of references to Afghan Wigs songs were worked into the mix, and the set was over. The band quickly returned for a second set — and then the fun really began. Dulli began paying homage to innumerable musical influences by interpreting their songs in ways only they could. Blue Oyster Cult, Stevie Nicks, John Coltrain, Marvin Gaye, Eric Clapton, the Beatles and Prince all made appearances at various points in multiple montages of melodies, but the highlight had to be the Pepsi challenge, comparing Outkast's "Hey Ya!" to an older Afghan Wigs song I didn't immediately recognize.

Also of note: during the first encore, Greg told a story about a friend who he'd met in the bar he owns and operates in L.A., a man by the name of Elliot Smith. The reference was pretty spooky for me, since I had last seen Smith on that very stage when Chop Suey was the Breakroom. Dulli's emotional story-telling trailed off into a dedication to Smith, "Martin Eden", the first track off of the new album Blackberry Belle. The crowd roared with approval as Dulli growled, "Black out the windows, it's party time. You know how I love stormy weather, so, let's all play suicide."

As the night wound down, it seemed I wasn't the only one with Monday night work issues. I could sense a shared sense of, "It's a Monday night. I have to work in the morning," from the well-mannered Seattle crowd, as we initially failed to lure the band back for another encore. We got chided from the bass player, who told us Seattle, "used to be a rock and roll town." This incited the crowd to get our act together enough to garner another long set of medleys from Dulli and company to close out the evening.