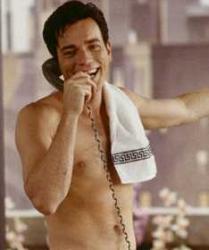 I love me some Ewan McGregor. He's hot, he's Scottish, he's really quite talented, and he has no qualms about getting all-the-way nekkid for the sake of his art. Or maybe he's just an exhibitionist, but who the hell cares? I'm sure you'll recall that the boy simply could not keep his well-proportioned dingdong in his pants in films like The Pillow Book and Velvet Goldmine and Trainspotting. Even in those terrible new Star Wars flicks, his Obi-Wan Kenobi is always fiddling with his lightsaber. Tell me, what is not to love?

I'd be first in line to see Ewan in a dumb G-rated Disney movie about bobsleds or basketball. I love him so much I'd go so far as to schlep out to Woodinville to see him in a Sandra Bullock vehicle. Hell, I'd pay to look at a still shot of the mole on his forehead for an hour and a half!

Have I made my point? Good. So maybe you have an inkling as to why I saw the new film Down With Love. I didn't expect a damn thing except a hearty dose of Vitamin E (sans dong, since it's rated PG-13), so the fact that the movie is pure delight from beginning to end caught me by surprise.

The film is an homage to those breezy, triflin' late-50s and early-60s battle-of-the-sexes comedies starring the likes of Doris Day and Rock Hudson and Tony Randall (who, by the way, has a cameo in this one). The opening Cinemascope logo, washed-out New York stock footage, and ridiculously large and colorful and artificial-looking sets are all here. Then there's the stereotypical rich playboy (my Ewan)… at odds with the sweet, spunky heroine (Renee Zellweger). She's in New York promoting her book Down With Love, a women's self-helper about owning one's sexuality and rejecting the need for a man's devotion. He's a chauvinistic men's-mag journalist determined to expose her as an old-fashioned love-seekin' gal. There are ruses and guises and truly surprising twists, all of which lead to a gloriously happy (musical!) conclusion.

Renee and Ewan number! My favorite scene is a divided sequence (the leads getting ready for a big milestone date) set to respective dueling versions of "Fly Me To The Moon" by are good together, and their earnest, energetic performances simultaneously parody and honor those of their back-in-the-day prototypes. There are fun innuendoes, suggestive split-screen action shots, and a couple of scenes with Ewan shirtless. Sounds gay, you say? Well let's not forget the Forrest Gump-style Judy GarlandFrank Sinatra and Astrud Gilberto. Beautiful!

Though feather-light in comparison, these retro-stylings are nearly as impressive as Far From Heaven's. While hardly as significant, Down With Love is a nice escapist alternative to SIFF and The Matrix, it's fun and gay and it has Ewan. Do you still need convincing?