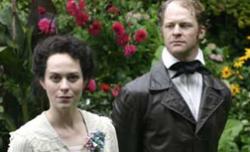 I will never, ever forget Suzanne Bouchard's delightful dual performances in last year's ultra-campy Empty Space Theatre production of Valley of the Dolls — her utter perfection as bitchy Helen Lawson and chilly Miriam Polar won a permanent place in this imaginary boy's heart. Ms. Bouchard is the best thing about Seattle Rep's new mounting of Misalliance, and considering the wealth of talent on display (and the fact that her character doesn't appear until Act II), that's saying a lot.

Act I of George Bernard Shaw's clever 1910 comedy amounts to a well-mannered yak-fest, introducing bored and privileged Hypatia Tarleton (fierce and beautiful Jennifer Erin Roberts; my date said she was awesome in last season's The Triumph of Love) and the chatty idle-rich characters who surround her. Hypatia's daddy John is a self-made underwear tycoon who endlessly extols the virtues of reading the works of Lombroso and Chesterton and Ibsen. Brother Johnny is a hunky but none-too-swift neo-conservative who gets along well with imperialist Lord Summerhays, an aristocrat whose infantile twit of a son Bentley is engaged to marry Hypatia.

Then there's the judicious and proper momma (the character is known only as Mrs. Tarleton), who wisely observes the goings-on with wit and fortitude. They all sit around the observatory of the Tarleton country home, chattering away about the state of affairs, as all the while Hypatia longs for an adventure to drop from the sky.

And in the glorious second act, that's just what happens — an aeroplane crashes into the house, and from the rubble steps happy-go-lucky pilot Joey (hot, charismatic Hans Altwies). Accompanying him is a thrill-seeking Polish acrobat/aviatrix named Lina (Bouchard, in yet another stunning performance), and for me the fast-moving remainder of the play is about her. She sees through the upper-crusters' pretense and hypocrisy. She challenges their fossilized social structure with a beautiful feminist diatribe you hardly believe is early-1900s. She even gets the others talking about actual issues — capitalist global trade, international politics, a ruler's use of fraud and force to secure power — that ring shockingly true today.

Despite the actors' distracting mélange of British dialects (Queen's English meets Scot meets Eastender – I was expecting Hypatia to say "innit" at any given moment), Misalliance is a thoughtful exploration of family dynamics, and a compelling example of Shaw's revolutionary talents.

{No trick — Halloween tickets to Misalliance are only ten bucks! All remaining seats to the Friday, October 31, 7:30 pm performance are now available for a measly ten-spot. You don't even have to come in costume! Phone or walk-up only — call 443-2222 for info.}