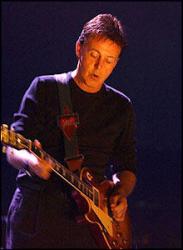 When Conor Oberst parlays his stray-puppy cuteness and sensitive charm into gushing reviews and mother-daughter cd-listening bonding sessions, he's following in the footsteps of the original parental-approved 'Cute One,' Paul McCartney. When Kim and Thurston brought matrimonial bad hair and questionable vocal harmonies to NYC's Lower East Side, Paul and Linda had already blazed the trail (with two matching mullets and one turned-down vocal mic) as husband-and-wife stage-sharing pioneers. When twee kids everywhere pick up guitars and write little songs about sheepdogs, raccoons, rams, and Mary Poppins characters, they're carrying a pop torch that Paul's been burning since at least The White Album in 1968.

OK, OK. It may be a little far-fetched to imagine that Paul McCartney is the original indie-pop boy wonder. But any cretin with a radio and an armchair-enthusiast's knack for "Rock-n-Roll Jeopardy" knows something about the Beatles and the vastness of their pop-cultural impact. An impact so vast, in fact, that when one Sir James Paul McCartney kicked off his "Back in the U.S." tour earlier this year offering tickets priced as high as $250, his legions of longtime fans didn't just lap them up. Drawing comparisons to the Beatles' initial 1964 American assault that cheered up a devastated nation in the aftermath of JFK's assassination, ticket buyers and music journalists alike hailed Paul's current U.S. tour as "Paul's Gift To America After 9/11." Not bad for a guy who's written plenty of little songs about sheepdogs, raccoons, and rams.

Now, thrifty boy that I am, it's hard to justify getting myself a gift that costs me $250, but I had to see Paul McCartney! Maybe it was George's death last year. Maybe it was the fact that "Beatlemania" was the first concert I ever went to. Maybe it was because Judy Hessling, my 6th-grade crush, told me "Hey Jude" was about her. Whatever the reason, I found myself plunking down the paper and driving to the Tacoma Dome. My imaginary girlfriend (and obsessive Paul junkie) Shannon also bought a ticket. This was our imaginary dream date! Just Shannon, me, Paul, and 20,000 grayed baby boomers and their kids!

Shannon and I were 15th row, center stage, main floor. Sitting next to me, she said she hoped Paul would sweat on her. She wasn't dreaming; we really were that close. We wondered which songs he would play. We held out hope for personal faves (hers: "Coming Up," mine: "Maybe I'm Amazed") as we carefully tucked away the coupon that read 'order Paul's two-CD live album before it comes out!' that had been printed and placed on every seat in the arena.

After a painful Cirque du Soleil-inspired, ecology-themed opening act of stilt-walkers, acrobats, and mimes, Paul took the stage, starting with "Hello Goodbye." Only Paul could turn a song ostensibly about miscommunication into a welcoming invitation (although anything would have been a welcoming invitation after the mimes). The song's final "Helloo-oo-oooooo," delivered with a wink to the crowd, got the boomers screaming like it was 1964 all over again. Shannon and I, too young to have been around the first time, were hooked immediately anyway.

Shannon spent most the night on her cell, calling various friends and family and holding up the phone during their favorite songs. I marveled at the fact that so many great songs — songs so imbedded in our musical psyche that it's easy to forget that they didn't always exist — were written by this one person. He introduced Beatles faves by with a mock-modest "here's one I wrote in the 60's" before turning out "We Can Work It Out" or "Getting Better" (which he'd never played live before this tour). His Wings material, derided in the 70s in comparison to his Beatles classics, held up more than admirably. In fact, his built-for-arenas Wings hits like "Band On The Run" and "Live and Let Die" (featuring explosions and fire!) seemed much more at home on the bigger-than-life stage at the Tacoma Dome than earlier numbers like "All My Loving."

Paul's backing band was aces, especially thunderous drummer Abe Laboreal Jr. The band replicated every familiar harmony line, guitar lick, drum roll, and bass fill with precision, passion, and enthusiasm. Sure, the band stuck close to the original recorded arrangements for maximum sing-along effect, but considering Paul's obsession with studio arrangements (which caused now-legendary dissent during the waning days of the Beatles), the faithfulness made sense. It preserved the sense of durability that has kept the songs so popular for over 30 years.

Shan and I were both impressed that at age 60, Paul had the energy to play and sing for three full hours without becoming visibly tired. Sure, he took sneaky breaks by sitting down at the piano bench and telling stories-about a post-show massage in Tokyo in which the massage therapist warbled an off-key version of "Yesterday" to relax him, or about how as a teenager, Paul pretended to be French while hanging out with John's friends at the Liverpool Art College (a prank that ultimately gave the world "Michelle," which I never knew).

Paul had energy to spare. He sang, he jumped around the stage, he played bass, he switched to guitar ("Let Me Roll It" shredded!), then to piano, then to organ, then back to bass. He just seemed so happy, even when he introduced his many 'songs to the departed' tributes to John (a wistful acoustic song called "Here Today"), George (a sweet, solo ukulele rendition of "Something"), Linda (the syrupy "My Love"), and the victims of 9/11 (last year's "Freedom," which is lovely as a gesture but mediocre as an actual song). He sang to the living too: encore "I Saw Her Standing There" was for "everybody in the house who wants to keep on rockin'" and "Your Loving Flame," was an earnest ballad written for Paul's new wife Heather.

At times, the show gleamed with a little too much polish. A few jokes were delivered a beat too early — as if on a timer, not off-the-cuff. And Paul's 'Cute' persona started to wear thin after three hours. Name another rock legend who thanks his audience by curling his arms in a heart shape above his head. Even crazy Brian Wilson doesn't do that!

But in the end, Shannon got her "Coming Up" and I got my "Maybe I'm Amazed," we went home happy. Because Paul has always been — and still is — a crowd pleaser, even when the crowd is 20,000 strong.