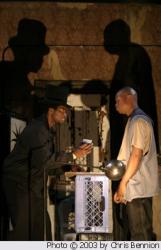 Playwright Suzan-Lori Parks is one of only four African-American women to have had a play produced on Broadway. She was the very first African-American woman to win a Pulitzer Prize for Drama; it was awarded just last year for her riveting comic tragedy Topdog/Underdog, now mounted in its West Coast premiere for a limited season-opening engagement at the Seattle Rep.

Two brothers named Lincoln and Booth (Harold Perrineau and Larry Gillard, Jr.) live together at a ramshackle boarding house in a nameless, timeless American city. Booth, a gifted thief, aspires to master a street hustle known as three-card monte. Lincoln, once a legend of the hustle, now has a "legitimate" career as a historical impersonator at a touristy arcade.

As you might have guessed, it's no coinky-dink that these characters are called Booth and Lincoln. "People like historical shit in a certain way," says Lincoln during a provocative key scene. "They like it to unfold the way they folded it up. Neatly, like a book. Not raggedy and bloody and screaming. Not with missing arms and legs. They like it a certain way."

It's ever-mesmerizing Perrineau (who you might remember from HBO's Oz or a little-seen underground film called The Matrix: Reloaded) who utters this gorgeous dialogue. It's just one of the brothers' fascinating quarrels and angst-ridden tête-à-têtes, rife with Cain-and-Abel intrigue; director George C. Wolfe stages it all with a remarkable mix of stark brutality and effervescent jazz.

But playwright Parks is the real star here. Her rich allegory of fraternal clashes and violent histories is terrifying – and hilarious – in ways that only the truth can be.