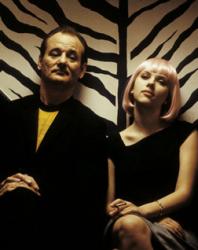 Lost in Translation and Matchstick Men

Let the Oscar® season commence. Here we have two wonderful movies, both opening September 12 at a Landmark Theatre near you, both concerning a platonic relationship between an older man and a younger woman, both featuring a rendition of the Roxy Music song "More Than This", both containing a funny scene in a strip club.

And both of which you should see asap.

Bob Harris (Bill Murray) is a washed-up Hollywood actor who arrives in Tokyo to shoot a whiskey commercial for a $2 million paycheck. Charlotte (Scarlett Johansson) is a recent Yale philosophy grad pondering what to make of life with her perpetually absent fashion-photographer husband (Giovanni Ribisi). Bob and Charlotte's paths cross one jet-lagged insomniac night in a hotel bar, and over the course of the next week they embark on a touching adventure in a neon-drenched alien land, together sorting through the confusion and stasis of their respective lives.

That's about the extent of Lost In Translation's plot, but this excellent film's keen mastery lies within its dreamy moodiness, and in the small details and subtleties that help conjure it: Bob's unseen but high-maintenance wife (ever sending unwanted FedExes and untimely faxes); Scarlett Johansson's droll, sad intensity as a conflicted and bewildered young woman (a delicious contrast to the airhead Hollywood tart played by Anna Harris); a breathtakingly lovely, Air-themed day trip to Kyoto (where the hanging of a paper crane suggests a newfound willingness to lay roots in an elusive foreign culture); a downbeat soundtrack (I love me some Phoenix) as cool and slick and streamlined as the story's setting.

Director Sofia Coppola is a genius, and this, her second feature (after 1999's equally moody The Virgin Suicides), is one of the best films of 2003. Her profound and unusual body of work is essentially redefining the Coppola brand — daddy Francis hasn't given us anything this original in many years. With Lost in Translation Sofia effectively brings popular appeal (Murray gets in some wonderful deadpan slapstick) to pure art cinema, a piece whose strange luminescence and alluring mystique demonstrate profound fascination with her subjects. It's gorgeously photographed, brilliantly acted, and languorously evocative of the search for spiritual enlightenment, and of those brief personal connections that can last a lifetime.

After a string of expensive too-much-action pictures (Gladiator, Black Hawk Down), director Ridley Scott revisits the smaller-scale buddy-comedy that made Thelma and Louise so great … and he succeeds beautifully. The tone of Matchstick Men oscillates between laughter and melodrama, and finds its strength somewhere in between.

On the surface, everything is in its place for Roy (Sofia Coppola's cousin Nicolas Cage) — sparkling blue swimming pool, squeaky-clean veranda, immaculate and tastefully-decorated home with a turntable playing lots of Sinatra vinyl. But when we're allowed to see that Roy's supply closet holds a selection of cleaning agents rivaling the housewares section at Fred Meyer, we begin to suspect something may be amiss. Sure enough, he's an obsessive-compulsive agoraphobe, zealously ritualizing the simplest of activities and prone to ticcing out when he's off his little pink pills.

He's also a con artist (which doesn't help with the stress) — he and show-offy co-grifter Frank (Sam Rockwell) have a little business whereby they trick unsuspecting old folk into paying triple-price for "water filtration systems" (actually $50 Brita-esque devices), then trick 'em again by posing as federal fraud agents to gain access to their bank accounts! The scoundrels!

When Roy's idiosyncrasies begin to threaten his criminal productivity he's forced to seek the help of a psychiatrist (Bruce Altman), and therapy begets more than he bargained for: the revelation that he has a teenage daughter (Alison Lohman) who wants to meet her daddy. At first, Angela disrupts her neurotic pop's carefully ordered routine, but soon the two form an offbeat (but touching) bond. At Angela's insistence and against his better judgment, Roy begins teaching her some tricks of the biz, and, surprisingly, she displays a remarkable gift for the grift.

The film is well-paced, the story packed with surprises (there's a wonderfully jolting, sure-to-be-classic scene in which a tender moment of dad-daughter laughter becomes an explosive confrontation and chase), and the performances first-rate. Rockwell (who was amazing in Confessions of a Dangerous Mind) is once again fantastic, all warm smiles and can't-help-but-be-sexy charisma. Lohman (fabulous in the only four aired episodes of the too-brilliant-for-Fox TV drama Pasadena) displays just the right mix of lively spontaneity and depth, with glimpses of maturity beyond her (supposed) fourteen years — she brings to mind a young Jessica Lange.

As with any good con film, there are twists here that require a big ol' leap of faith — but with all the talent and energy on display in Matchstick Men, we never feel like we're jumping too far.