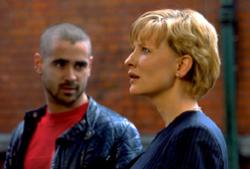 Veronica Guerin, The Station Agent, My Life Without Me, Dopamine

Most of you enjoyed the super-sunny, wickedly-warm summer we had this year. Well I'm sorry, but those days are gone. Actually, I'm not sorry, because the good weather (cool + cloudy = delicious) has finally arrived. And that makes embracey so happy. But for those of you who look dejectedly upward to beautifully murky skies, stop your silly pouting and take comfort in cinema. (That's what I did all damn summer while you were out throwing a Frisbee.)

It's a big weekend for good new movies, and Joel Schumacher's absorbing thriller Veronica Guerin could prove to be a fine tonic for those daylight-deficiency blues. Based on the true story of the eponymous Irish journalist murdered by gangsters while investigating drug crimes in mid-'90s Dublin, it's an insightful look at the life and death of a modern crusader.

Wonderful Cate Blanchett, versatile enough to affect an impeccable Irish accent, plays Veronica with vigor, depth, and tenderness — despite some rather sanctimonious family scenes early on. (It wasn't really until the movie found its bearings as a thriller near the end of act 1 that it actually grabbed me.) Gerald McSorley is genuinely terrifying as pursued gangleader John Gilligan; in a film this tough on crime (no ordinary decent heroin lords to be found here) his performance could have easily descended to stereotype. But it didn't, and Gilligan's lingering menace adds to the film's impact.

Schumacher's body of work is a mixed bag, but thankfully Veronica Guerin is more Tigerland than Batman Forever. Unparalleled hottie Colin Farrell (after whom Schumacher lusts, and why wouldn't he?) even makes a brief but memorable appearance as a tattooed Cantona fan.

But it's criminally underutilized Brenda Fricker's ingeniously subtle performance as Veronica's momma that really makes this flick worth seeing. Whether reading her grandson a bedtime story, offering a tiny piece of sage advice, or turning her head ever so slightly to lovingly contemplate her daughter, she adds richness and warmth to to a movie that might otherwise have been lacking.

In the new indie weepie My Life Without Me, a 24-year-old woman (incredible Sarah Polley) who lives in a trailer behind her mother's (Deborah Harry) house with her husband (Felicity hottie Scott Speedman) and their two young girls (cute lil' actresses, names unimportant), is diagnosed with terminal cancer. She chooses to die quietly and on her own terms, ever ticking off items on her "To Do Before I Die" list, and seizing the chance to sow her wild oats (via a little fling with Mark Ruffalo) as she privately sets her family's affairs in order.

This would be Lifetime® material if not for Polley's typically thoughtful lead performance, which at least makes her passive-aggressive character appear more caring than her actions suggest: nearly everything she does on-screen, whether we like it or not, feels believable and sympathetic and true. And some very funny supporting characters (a middle-aged waitress who aspires to look like Cher, a dreadlocked hairdresser who loves her some Milli Vanilli) add effervescent charm to the heart-wrenching (if occasionally heavy-handed) material.

A reclusive dwarf named Fin (fantastic Peter Dinklage) inherits an abandoned New Jersey train depot following the sudden death of his one and only comrade. Fin's life has been an object of spectacle, so he seeks solace from humanity. But what we think we need often eludes us: when a loud, attention-seeking hot dog vendor (charismatic Bobby Cannavale, who could slip me a weenie any day) and a brittle, stand-offish artist (always-wonderful Patricia Clarkson) intrude on his solitude, Fin reluctantly opens up, and a touching bond develops between three isolated souls.

The Station Agent won big in Park City this year, and indeed it feels like a Sundance movie: quirky, engaging, uplifting, a little on the precious side. The performances are marvelous, the laughs genuine and warm-hearted. And when young scene-stealer Raven Goodman shows up (you may remember her from last year's Lovely and Amazing), this little movie finds big joy.

Dopamine is the Sundance Film Series' third offering (following The Other Side of the Bed and In This World), and is my least favorite of the bunch. 'Tis a (hetero) romance in which one of the participants, a dorky San Fran software designer (John Livingston, a bargain-basement Ben Affleck), has taken stock in his musty old dad's too-much-time-on-my-hands theories that love is chemical. (The title refers to the natural amphetamine our brains produce during states of assurance and euphoria.) When wanna-Ben meets a hot but fragile schoolteacher (Sabrina Lloyd, whose very presence brought back happy memories of her days on Sports Night), is his attraction strictly about physiology, or a more romantic type of chemistry?

I really didn't care, and I can't imagine you will either. This thing sure takes its time fishing for answers though. Don't get me wrong, it's a well intentioned little flick. Sweet, with some chilly charm. It just didn't give me the dopamine rush that Die Mommie Die! did.