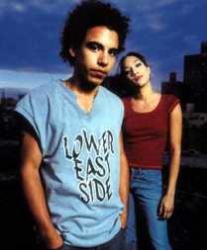 OK folks, one more stab at patriotism and I'm done. Two newly-released domestic films deserve props before I get goin' with SIFF coverage. Raising Victor Vargas (out now) and Manic (opens mid-May) have both wowed Park City audiences (but in different years), they're both products of the USA, they're both teen-centric, and they're both playing (or gonna be playing) at a Landmark Theatre near you. The similarities pretty much end there.

The resulting story is engrossing and genuine, though always a degree more beautiful than real life. Each of the first-time actors is a separate revelation, and director Peter Sollett steers them clear of just about every possible dumb teen-angst trap. This is a tender and awe-inspiring piece of cinema that surprises (pleasant dinner party goes humiliatingly wrong) as effortlessly as it warms the heart (siblings comfort Victor after one of Grandma's more sternly punitive flights of fancy). What Raising Victor Vargas lacks in traditional narrative it makes up for in its ultimate message — that we all need each other, despite the unavoidable fuckups and disappointments of life.

Fuckups and disappointments run rampant in the lives of Manic's psych-ward characters, especially that of Lyle (Joseph Gordon-Levitt, in a big improvement over TV swill like Third Rock from the Sun), the newest resident of the high-security wing. He's there after going upside a schoolmate's head with a baseball bat. Repeatedly. For all of his uncontrollable inner violence, Lyle is attracted to the withdrawn, nightmare-plagued Tracey (Zooey Deschanel, one of the coolest young actresses working today — see The Good Girl and All The Real Girls for proof).

Their resulting clandestine relationship takes a backseat to the fascinating stories and dynamics of the other residents — most notably the sweet, heartbreaking Kenny (Cody Lightning) and sardonic bipolar rich-kid Chad (co-screenwriter Michael Bacall). Then there's Dr. David Monroe (Don Cheadle in one of his finest performances), struggling with uncertainty that his work is actually doing any good.

Manic has been collecting dust on a shelf somewhere since its 2001 Sundance debut. Why, I dunno. It's a very good movie. Director Jordan Melamed borrows from the spirit of the best Dogme 95 films — the shaky camera movements and artfully sparse set designs work well to make the setting seem not-so-bleak. Melamed deals cleverly with some difficult subject matter here, demonstrating enormous skill at making bursts of violence grab you by the throat. And the partially-improvised dialogue is occasionally priceless — a "which comic book character would win in a fight" group-therapy debate, for example, had the audience yellin'.

But the movie packs its biggest punch when a recurring, much-discussed print of Van Gogh's final painting "Wheatfield With Crows" reveals its symbolic contextual truth. It made this imaginary boy gasp with the realization that no matter how we try to escape reality, we all need each other — despite the unavoidable fuckups and disappointments of life.