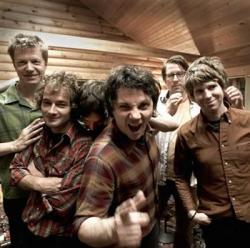 Could there be anything better than seeing a band you truly love playing outdoors on the last day of Bumbershoot? If that band is Wilco, the answer is absofuckinglutely not! Usually the Monday of Bumberweekend makes me sad, but this fine day, I saw Wilco at Memorial Stadium, and went to a private reception with the band before a screening of the new Sam Jones film I Am Trying to Break Your Heart. Holy shit, I am high on life, baby — Wilco, up close and in person!

OK, I have to admit right off the bat that I love Wilco, and have for years. With the release of Summerteeth three years ago, I fell madly, head over heels in love with these guys, and promptly went back in time to get AM, Being There, all the old Uncle Tupelo stuff, all the Mermaid Avenue stuff they did with Billy Bragg, and everything Jeff Tweedy did with Golden Smog. Right. I am a bit nuts, so it was a little astonishing, but truly gratifying, to see a full crowd at Memorial Stadium.

The audience was chock full of earnest looking guys (and it was mostly guys), who all had looks on their faces like, "I should really like this band, the buzz is really good!" Stroking their chin fuzz, and nodding in time with the music. So very Seattle. The band came out onto the stage, and Jeff promptly admitted that they had just awoken shortly before. Uh oh.

I need not have worried. Wilco kicked off the set with three songs from Foxtrot, including a truly kick-ass "War on War", which had a loud driving beat that nicely offset the clean simple guitar of "I Am Trying to Break Your Heart" which had preceded it. The band then broke into "Kamera", which Jeff called "I Need a Camera" — but, hey, whatever — it sounded great. The crowd seemed to be digging the music, and I was pleasantly surprised to see that there were quite a few folks who knew the lyrics.

Alas, everyone fell strangely still when the band broke out some jamming tunes from the last album, Summerteeth. Jeff and company broke out a crankin' rendition of "A Shot in the Arm", one of my faves from this album. Woohoo! It wailed! It screamed! It sounded fantastic! No-one around me knew any of the words, except three drunk and high straight guys off to my right. Confidential to you boys: you are my new Straight Boy Action Heroes — you might have been stoned off your asses, and drinking Everclear out of an old squeeze bottle, but you fuckers danced and sang to the kick-ass performance that had everyone else perplexed. Kudos to you.

From there we got the excellent counterbalance of a lounge-y feeling "How to Fight Loneliness" from Summerteeth, juxtaposed against another scintillating bit from Foxtrot, "Heavy Metal Drummer". Tweedy tried to get the audience to play along with this one, but got a shamefully lackluster response. He mumbled something about, "I guess that's the best we can do at a quarter to two." Sigh. Yeah, but it was a quarter to two in the afternoon, with amazing music, at the biggest music festival in the Pacific North… ah, whatever. The crowd may not have played along, but my boys sounded great.

I could relentlessly name everything else on the playlist, but suffice it to say there was a great mix of the new tunes from all of their releases. One true standout from Mermaid was "California Stars." Sure, even on a crappy little walkman this song can bring tears to my eyes, but to hear it played live on such a lovely day, ahhh… what bliss. "I'd love to feel your hand touching mine/ And tell me why I must keep working on/ Yes, I'd give my life to lay my head tonight/ On a bed of California stars." Sing it, Brother Tweedy. (Confidential to GG in SF: I'm thinking of you here, kiddo.)

The band ended the regular set with "Misunderstood" from Being There — a virtual paean to being a creative soul in a world that doesn't often reward the kind of daring creativity that Wilco has cultivated over the years. The song slowly builds to a crescendo of angst: "I want to thank you for nothing, nothing, nothing, NOTHING!"

Holy Fuck! Tweedy was screaming this at the crowd, it seemed. Folks were mesmerized, enthralled, enraptured. At the sudden, shocking silence at the end of the song, the band splits, and the crowd goes wild: "He hates us!" they are thinking, "He really, truly hates us! He is a genius! Come back and hate us more! (Quick! Let's buy the album.)"

The band comes back, and Jeff pulls on an acoustic guitar and says: "You see the acoustic guitar and you know we are going for the jugular." Ah, I freakin' love this guy. The encore set was brilliant — "Hesitating Beauty" from Mermaid, and more Being There. The perfect end to the perfect Wilco show.

Oh, but I'm not done my friends, because after a quick trip home to shower and shave, it was back to the Center, up to the Space Needle reception room, and into a grand buffet with the band. While I didn't manage to meet Jeff, I did cleverly use my friend Susan as a decoy to meet the bassist, John Stirratt. We had a quick chat about the show, and he agreed that the crowd seemed really "intense and intent." I think we Seattleites might have scared Wilco with our earnestness. Note for future shows, kids: try not to scare the band by looking like you are studying them for future dissection.

After a few well placed asparagus spears it was off the EMP for the screening of the film. As I am sure you know at this point, the film I Am Trying to Break Your Heart is about the making of Yankee Hotel Foxtrot. It turned out to be a damn fine piece of film work about the band and their music, while also being a damning representation of the music industry as a whole.

What originally started as a simple documentary to memorialize the creative process turned into an amazing glimpse into the real life trials and tribulations of music making. Jones manages to capture and fairly portray the strife of longtime band members dealing with creative differences in the departure of Jay Bennett from the band, and display what happens when a band delivers a strong but difficult to market album to a label that doesn't really understand them.

It's hard to not give it all away (if I haven't already), but this is one of those rare cases of musical documentary that propels the band it documents to new heights. The passion they display for their music is inspiring, and the music itself is amazing. It has funny moments and sad moments and just plain awkward moments. I dare you to go see this film and not walk away humming the songs, and being newly, freshly, shamelessly in love with Wilco. Go on, I double dog dare you.