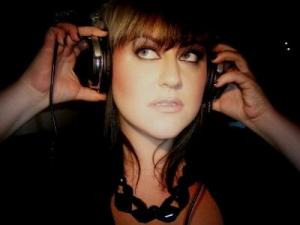 I don’t find myself in agreement with The Stranger’s catty gossip writer Adrian Ryan all that often, but I think he might have been on to something when he wrote that DJ Colby B was “the best fucking club DJ in the universe”.

Hyperbole aside, if you’ve been to any events in Seattle where there’s a 4/4 dance beat being played, it won’t take long before you hear DJ Colby spinning records. She is one of the most prolific and skilled DJs in the Northwest, who always has a knack for finding the right song at any given moment. This weekend she spins records at two high-profile shows in Seattle, opening for the electronic duo Simian Mobile Disco on Friday night at Neumo’s and for Kim Ann Foxman (of Hercules and Love Affair) on Sunday night at Chop Suey.

How did you become a DJ? What made you want to become one?

I’ve been surrounded by live music my entire life (the alt. pic they ask you to submit for senior yearbook? Mine was me at 2 standing on a stage in between speaker stacks). I’ve seen artists of every genre, but always had a draw to the beat. Around the time I turned 21, I was working for some bigger record labels and getting tons of CD promo advances and also started working at the legendary Seattle club ARO.space (now home to Neumo’s). Being exposed to amazing DJ’s and electronic music on a regular basis set the foundation and when Pioneer released the CDJ1000’s in 2002, I took my promo CDs and got to work.

When you hear new songs, do you think of how they will mix with other ones? What do you listen for? Is there something you notice that will say "this song will get people dancing?

Oh the curse of a DJ, you do that with almost any song you hear (and anywhere, sometimes elevator music gets me going). I like so many genres that there is never any one thing I listen for, I do pay attention to how the track breaks down, how it will effect a mix or the flow of a set. I just go with what I like, what makes me dance. I'm into a strong bass line, but other than that there isn’t one thing I can put my finger on that makes me fall in love with a track. As far as it being a song that will get people dancing, I’ve worked hard at playing what I like, exposing people to new things and have had pretty good luck so far.

What is the best set you've put on? How so?

There have been so many amazing experiences so far it’s hard to narrow it down. I’ve said before playing at Comeback (the 5 year running, monthly alt gay party I throw with Marcus Wilson and Eric Grandy at Chop Suey) is magical, I can play anything and the energy on the dance floor (and everything they can climb up on) is awe inspiring, that night never lasts long enough. I always have a love affair with the tracks I play, it’s the crowd that puts it over the top and makes all the difference in the world.

How many nights do you spin records in a given week?

It varies, depending on what’s going on in town and my bookings. I shoot for at least once a week, but for example, I'm playing 4 times in 3 days this weekend!

Madness (laughs), searching for new music, studying the music I have, working on booking and events (in town and out), working at our clubs, traveling and scheming for the future.

Do you think the stereotype that "Seattle doesn't dance" is fair/true? (I probably do my part to perpetuate that typecasting.)

I have a love/hate relationship with the crowds of Seattle’s music scene, sometimes wondering if they know how lucky they are to get the tours/artists that we do get coming through our neck of the woods. I’ve seen show and show again barely sold but so good they top my all time favorite concerts, and many of shows with people standing around proving The Rapture right (people don’t dance anymore, they just stand there like this…) BUT that being said, I can say that so many of my sets have been inspired by the amazing people flailing about in front of me, making my job so worthwhile.

What are your favorite songs to play? Why so?

They change all the time. Because I play out so much I go through tracks a lot faster, trying not to get stale or bored with them. Lately i've been back to playing artists like Laidback Luke, Herve, Breakdown, etc. more fun dancey type stuff. Also most of last year my crew worked on a party called Confession where we had artists such as AC Slater, Designer Drugs, Roccanova, Honey Dijon, Them Jeans and more, all producing amazing music and remixes. Its great to be able to support those whose tracks are “making” your sets.

What are your favorite clubs (in Seattle and elsewhere) to DJ?

In Seattle, Chop Suey and the Showbox (Market and SODO) top my list, they possess this vibe that’s hard to explain, but I’ve never had a bad experience playing there; plus I’ve worked at both for years, so the staff is like family. The Pioneer Square clubs (i.e. Trinity, Last Supper Club, etc) tend to have the best DJ set-ups – the sound in the booths is amazing. For out of town, Mr. Black in NYC is my other home, my east coast family. They’ve had a few locations over the past few years, the current space is amazing, everything you think a NYC nightclub should be. Other than that, there is a story behind every club I've played (the European ones are the best!).

What other artists are you inspired by? DJs and otherwise.

Anyone who makes music, or any kind of art for that matter. I’ve always been a bit of an art nerd, and wouldn’t have a job if it weren’t for other artists creating tracks for us DJ’s to play. Lately its been a lot of my NYC friends, like Larry Tee and Man Parrish that have been relevant and part of the industry for so long, spanning many different decades, scenes, genre’s and then some (both pushing 50 and still putting out records!).

Are you going to approach song-selection differently for the Simian Mobile Disco and Kim Ann Foxman shows this weekend?

Yes definitely, I approach every set specifically for the event I’m playing. I never really “color in the lines” during a set, spanning many genres throughout, but you also don’t want to exclude the crowd, if you know what I mean; I wouldn’t open for Jay Z with a banging techno track, but I’d play a banging techno remix of Tupac if it fits. Usually I’ll do a little research if I haven’t seen them live before, see if can get a feel for what the other artist might play, and work hard to create an environment once the night starts.

Do the songs you play in clubs differ from what you listen to outside of DJing?

Constantly searching for that perfect track takes up most of my time, but I love all music, even country, I get quite a bit of teasing for that one. You could put on anything and Id be happy. Over the past few months I’ve gotten to be more of a spectator and have been loving the new/old Motown sound of artists such as Sharon Jones, Estelle and Raphael Saddiq.

What other shows do you have coming up?

Where to begin, here are a few highlights for the next month, spring is gonna be rockin!

3/19 Still Ill w/ Andy Pry (throne of blood) @ Chop Suey (side note, that guy does stuff with The Rapture, also should be good)

Followed by a west coast tour 4/14- 4/28 with TUBWAY (nyc) DJ’s Nita Aviance and Gant Johnson, a new CD this summer and an US/Europ
ean tour after.