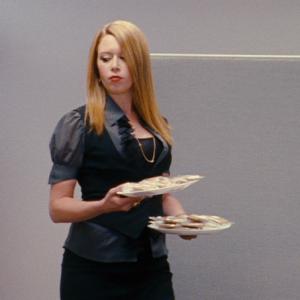 When I saw The Immaculate Conception of Little Dizzle at the Seattle International Film Festival, it was one of the most unusual films I’ve ever seen. It was directed by local filmmaker David Russo, in his first feature film.

The film follows a group of janitors who find a batch of self-heating cookies that have adverse side effects. Natasha Lyonne is the star of the film as Tracy, a market researcher whose job has a moral quandary she may not be ready to face. It’s a very subtle and understated performance.

I talked with Natasha Lyonne (an actress I’ve really admired for more than a decade now, with brilliant performances in But I’m a Cheerleader, The Slums of Beverly Hills and Everyone Says I Love You) at SIFF, before she had a chance to see the film herself. When I interviewed her, she was quite lovely and funny and was very easy to talk to immediately.

How did you get the script to The Immaculate Conception of Little Dizzle and what was your first impression?

It wasn’t some magical story to getting the script but I did respond incredibly to it and tried very hard to get (the part of Tracy) – successfully in the end. I could tell this guy, David Russo, was up to something special and I really wanted to be a part of it. I think there was some discussion early on, considering me for the part of the bad girl, but from what I hear, I haven’t seen it yet, but Tania (Raymonde) is amazing in (that part), right?

But I also really love Vince Vieluf, who is also in it. I was very excited to work with him. I really liked the idea of playing this adult woman who is struggling with corruption and morality, this modern social dilemma. She didn’t want to have the responsibility of the world, the collective consciousness on her shoulders. She avoided that her whole life but suddenly she can’t ignore it. I think it is an interesting subject for a character. Who knows if it came through because I haven’t seen the movie yet.

Was there something that made you say, “here’s a film about some janitors who are eating cookies out of the trashcan and it leads to them being impregnated – and I’m in!”

There was definitely that element that made me want to be in it, but I like the idea that ultimately a movie should be entertaining and if it can trick you into thinking about larger ideas, that is the ideal – to get at your soul and seep into your consciousness with the right message, like there’s a subliminal message, the loftier message and the good purpose. Here’s a movie we’re going to enjoy but also get something to consider, which is about these crazy times we’re living in: putting yourself at the mercy of industry or convenience. It’s very scary right now. Who is winning in this exchange? Do I really want my thumbprint and photo ID on my credit card?

You’ve always had a knack for finding films that do have the right message, like But I’m a Cheerleader.

I’ve sort of been lucky in a way. I don’t get to make the biggest movies or make the most money and not everyone gets to see them – at all – but I get to make movies that are interesting to me and I don’t always agree with a filmmaker’s point of view, but I appreciate that the filmmaker has a point of view; they deserve to make a their movie and put it out there.

…But not all the time. I haven’t made all fucking prizes or anything. Certainly there’s always been an element I find interesting. In this one, I think there are a lot of elements. I think David Russo is a very talented guy, so to get to work with someone like that on his first feature is really great.

Have you met him before?

No, I only met him around the time I was trying to convince him to allow me to be in the movie.

I’m glad it worked out that way.

You haven’t seen the film at all? Tonight will be your first time seeing it?

Yeah, I’m headed to the Egyptian to see it, which sounds suspicious. (laughs) I thought I was supposed to be in Seattle, right?

The Egyptian is this really cool, old theater, though, and it’s huge; and it’ll probably be full.

Yeah, they say the screening is sold out, which makes me feel like I’m Bette Midler in a reunion concert. “I sold out the Egyptian!” I’m pretty sure that it is not going to be like that at all.

Do you know if this film been picked up yet?

I don’t know, has it? (loudly, to a publicist in the room)

(Publicist: yes, in the Middle East, Australia and New Zealand)

That’s not surprising. I thought, “you know who is going to love this? The Middle East."

Jordan loves me! New Zealand gets it!

What is America’s problem, then?

Listen, America has a lot of problems, let’s face it. Primarily, they haven’t picked up this picture yet.

Yeah, screw the health crisis, the economy, etc… When is Little Dizzle going to be in a theater near me?

Right. A strong economy or health care for everyone would be nice, but…

Really, though, I feel good about this and I’m confident that it’ll find its audience. It seems to be doing well. You can’t keep a good filmmaker down – although it has been attempted, many times.

What else are you working on?

A few weeks ago I finished a movie in San Francisco called All About Evil that I really like. I think it’s going to be a special movie, very different from this one; very funny. It’s about a girl who inherits an old movie theater when her dad dies and becomes obsessed with showbiz and really loses her mind. I really enjoyed it. With this film, they share how they are both made in the filmmaker’s hometown, with a hometown crew that believes in his movie. There was a lot of passion in both crews, like they show up to work for free because they wanted to be a part of it. I really liked my experiences making both of these movies.

When I saw Little Dizzle last night, it really had that sense. It was full of friends of the filmmaker and crew and whenever, say, the caterers name appeared on the screen, their friends in the audience applauded for them. Same for the grip or whoever.

When you make an independent movie, versus a studio movie, it should be that way. That should be what distinguishes a mom and pop store versus a fucking Wal-Mart. There are those propaganda films that we have to watch over and over again, and then there are those special gems, made with heart and sweat and blood and guts. Those are the ones I actually enjoy making.

It would be nice to make a living now and then and there is good timing with a well-oiled machine but I really enjoy the safe environment of knowing you’re creating something, not selling something. It’s precious and I like that. But then little movies can be rough: crazy hours, no budget – but I like that going into the jungle.

It’s really great, though, that this film has been getting a great response at all of the festivals it’s played at. That is what independent filmmaking is all about. It’s not some star vehicle no one wants to see.