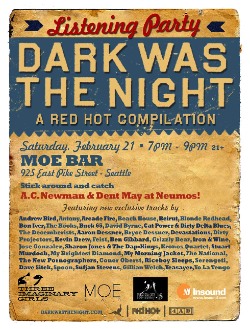 Imaginary meet-up: Dark Was The Night listening party at Moe Bar on Saturday (2/21)

Three Imaginary Girls has joined forces with the folks at the Red Hot Organization, Insound.com, and 4AD to put together a Dark Was The Night listening party at the Moe Bar on Saturday, February 21st from 7pm to 9pm.

The night is free and will feature a chances for you to win your own copy of the Dark Was The Night album and good times. We'll be playing the double album set in its entirety.

Not only that, it serves as a perfect pre-funk if you're headed to the A.C . Newman show at Neumo's (conveniently located right next door to the Moe Bar) (enter to win tickets to the A.C. Newman show from TIG).

If you want to sample the record ahead of time, check out the DWTN MySpace page where they are streaming some of the album's tracks until the release date (February 17th) or download this mp3 of a track supplied by Dirty Projectors + David Byrne.

See you at the Moe Bar on Saturday February 21st to hang out and listen to some stellar tunes!

And here's the full track listing for those of us that love the details: