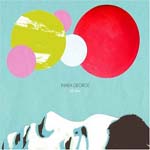 This album sounds like what it would be like to be on vacation in a small green bracken-laced village in Southern Europe, on a warm but comfortable early autumn night, safely in love with your traveling companion.

Inara's effortlessly engaging vocals remind me of Norah Jones. But, instead of playing the VH-1 chanteuse, she seems much more clever thanks to the enigmatic nature of her lyrics.

Those perfect vocals have been engaged with creatively by everyone from Jackson Browne (who sings on the cosmically questioning "A Day") to Idlewild (whom she's currently touring with) to Van Dyke Parks to Danny Elfman. Friends from bands for Beck and Ben Harper and previous Cake drummer Pete McNeal helped out on this debut. Also noteworthy, her father was Lowell George of Little Feat — explaining the easy way she grooves all over this album.

From the playfully-confrontational "Mistress" that opens the album, to the Camera Obscura power pop of "Genius," to the New Buffalo-style electronic mischief of "Everybody Knows" (not a Leonard Cohen cover), Inara and her conspirators explore a range of textures and mood-song on All Rise.

At least half the album is remarkable, and the other half nearly so. Whilst there is nothing that completely devastates, I have the feeling that Inara has it in her to do so, and maybe that song will be on the next record. I can't wait to hear it.