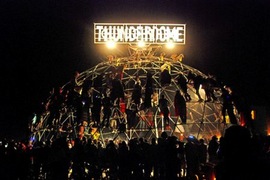 Indie-Rock Thunderdome: The Flaming Lips vs. The Arcade Fire

Talking candidly, Coyne took the gloves off and went on a tirade about everyone's other favorite indie band, The Arcade Fire, taking them to task for being big jerks. Well, okay, that's not quite how he put it.

"I'm a fan of them on one level, but on another level I get really tired of their pompousness … We've played some shows with them and they really treat people like shit. Whenever I've been around them, I've found that they not only treated their crew like shit, they treated the audience like shit. They treated everybody in their vicinity like shit. I thought, 'Who do they think they are?' I don't know why people put up with it. I wouldn't put up with it. I don't care if it's Arcade Fire or Brian Eno. If either of them walked into a room and treated people like shit I'd be like, 'Fuck you, get outta here.'

You kiss your mother with that mouth?

Coyne's never been one to shy away from bold conversation. In the past he's railed against Beck to The Guardian, as well as Arctic Monkeys and Oasis (who hasn't complained about them?) to The Daily Star. It appears Coyne is big on manners. Good on him.

But wait! Win Butler of The Arcade Fire wants to defend himself! In a post on the band's Flash-fueled website, Butler takes the high road while getting a subtle jab in.

So…I am not sure Wayne is the best judge (based on seeing us play at a couple of festivals) if we are righteous, kind and goodhearted people like The Edge and Justin Timberlake (who I am sure he knows intimately as well). I can't imagine a reason why we would have been pompous towards The Flaming Lips, a band we have always loved, on that particular night, all those years ago. Unless I was way more jet-lagged then I remember, I hope I was less of a "Prick" then telling Rollingstone that a bunch of people I don't know at all are really a bunch of assholes.

Interview fights like these are increasingly common in today's hyperactive news cycle, and predictably, the Internet has rushed to the aid of their respective favorite band, unleashing the fury of their Caps Locks key in the comments of various music blogs. Truly, this is what the Internet was made for.

So who wins? I'm not a fan of either band, honestly, though the Lips get points for referencing Pink Robots all those years ago. Butler's response is certainly more measured and not quite as erratic, but let's get real: Not only is this great publicity for both bands, it's so entertaining. I'm crossing my fingers for a Celebrity Boxing match in the near future.

Who's the bigger jerk? Wayne or Win? Drop a comment and let us know. But please, turn the Caps off.