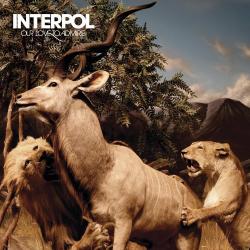 Our Love To Admire

The third release from New York dolls Interpol is exactly what we’ve come to expect from the four lads: a beautiful, melancholic exploration of sound and texture.

It’s interesting now to revisit how I felt when the debut, Turn on the Bright Lights, first came out. I was staggered by the sound: Immediately throw-back/retro, but sublimely new again. It filled the nooks and crannies of my soul that had been worn a bit thin. I say it’s interesting to reconsider this feeling, because now Interpol are a huge part of my musical repertoire: They’re a staple, a go-to. It’s tough to imagine having them not in my collection. Interpol’s once-surprising, happily unsettling sound is now like my favorite glass of Rosso… trusty, reliable, undeniably good.

While the band has grown, infusing more instrumentation and vocal layers into their third album, Our Love To Admire still sounds like an Interpol record: a good thing, since this is their first on a major label (Capitol), and it could’ve gone either way. The bigwigs were able to draw on Interpol’s established sound, coaxing more out of their natural tendencies rather than steering them into a new direction.

Our Love is comfortable yet sexy and wandering. It’s poppy and hit-laden (See “The Heinrich Maneuver,” the album’s first single), slightly different, slightly more progressed than the previous two, but still familiar and true to the band’s core. Paul Banks’ voice is more pointed and stronger than ever, especially on the shudderingly gorgeous “Pioneer to the Falls." Daniel Kessler’s shimmering guitars are still resplendent (again highlighted on “Pioneer”). Sam Fogarino’s drums boom and crash and thunder in perfectly layered textures behind the melodies. Carlos D’s basslines jag and bounce their way around the record, lending the signature dance-vibe to the otherwise gloomy melodies.

“Pioneer” is clearly a highlight, and the perfect way to open the album. It’s dark, masochistic even. (Excerpt lyric: “Show me the dirt pile and I will pray.”) Not until the 2.30-minute checkpoint does it finally lift, into Kessler’s waterfall-like warbling guitars (or is it a mandolin?). But don’t think Interpol then launch into a pop ballad; no, the tension resumes, and the track concludes with a very Morrissey-esque tactic: inserting a chorale of understated, minor-key horns.

Another top number is “Rest My Chemistry,” wherein Banks and company manage to make the inner workings of a coke-addled brain (Banks’ own? You decide.) sound so titillating. Banks’ delivery of lines like “You look so young, like a daisy in my lazy eyes” make me swoon — even against my better judgment, knowing the subject matter. My favorite song of the lot is unfortunately one that only folks who preordered the album through iTunes (or those who seek the Japanese import) will hear: “Mind Over Time.” It’s worth seeking. “Mammoth” grates a bit, though I suspect intentionally. It’s layered with a truly rock-heavy guitar lick, alongside Banks angrily spitting out lyrics like “spare me the suspense” and “enough with this fucking incense.”

There is one dud: the morose, monotonous “The Lighthouse.” But even it finds its groove toward the end of the track, making me question whether “dud” is the correct word here. Either way, one track out of 11 (12) is not a bad ratio. I’m not shocked by these odds. Interpol was a well-oiled machine from the start. Even their flaws worked. Their songs continue to fill my soul, as any good staple should. And on Our Love, Interpol show that they’re in it for the long-haul.