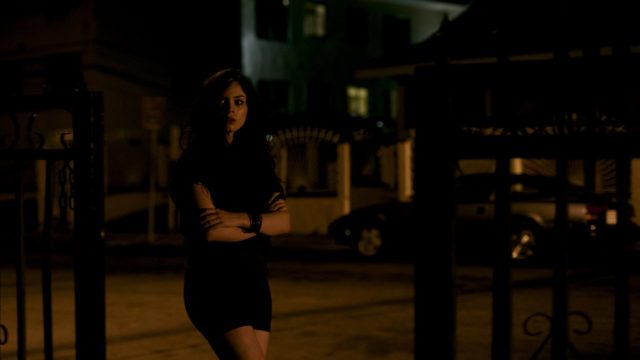 I was super stoked to to see that Megan Griffiths’ latest film, The Night Stalker, was premiering at SIFF this year! The film is about terrifying serial killer Richard Ramirez, and does an excellent job shifting between past {1985} and near-present {2013} to give us a good look at both the man himself and a character who’s obsessed with him, Kit. Everyone in the cast is great, but I especially loved Lou Diamond Phillips as the older, imprisoned Ramirez, and Chelle Sherrill as teen aged Kit. And, of course, I loved the story and the direction – because, HI! My name is Amie and I am a big fan of Megan and what she does with a pen and a camera.

So it follows that I was also SUPER stoked to talk on the phone with her about this film … plus, bond over our love of Scarecrow Video and also our love for the cinematic classic Young Guns. OMG. I just want to be best friends with this woman already!

TIG: What brought you to this project? Were you always interested in The Night Stalker?
Megan Griffiths: I was definitely always aware of him because I grew up in Riverside, California and lived there in 1985 when he was on the prowl and I was terrified of him. I was 10 years old and that was my first exposure to that kind of fear. And then this kind of came up as a random opportunity when I talked to a producer about the book that the screenplay was based on. So it sparked my history with him.

TIG: Since you lived in that area when he was at large, is there a little bit of Megan in the character of {teenage} Kit?

MG: I would say that there are elements in that world that come from my own experiences, rather than parts of her that come from me. Her character is about 5 years older than I was at the time, but yeah. Minute details like her clipping her curtains shut; that’s directly from my childhood. I always thought Ramirez would be crawling in my window … as if clipping my curtains shut would stop him, but I actually did that!

Also the way people talked about him and the mythology that grew up around him very quickly. Like the idea that he targeted beige houses, or houses right off the freeway. All that stuff was based on facts, but I thought of it because of this weird playground mythology. Another thing I included in there from my experience was remembering that the summer was super hot and everyone felt trapped inside — even though that’s the last place you’d want to be.

TIG: You definitely captured that teenage feeling of being invincible in Kit! I loved the way you had her jumping between being afraid and being fearless.

MG: There’s that fine line between fascination and fear. Being 15, the character isn’t sure why she’s excited. Part of it is this freedom of being out alone, and part of is this weird attraction to something {Ramirez}, even though it’s scary. Kit is a character is more darkly drawn to that scariness than some. It’s more of an obsession for her.

TIG: What kind of music did you listen to while writing or directing this to get in the mood?

MG: In this case, I was going for things that were a little harder. Ramirez was really obsessed with metal, and of course that was big at the time in the 1980s, mainstream metal like AC/DC. etc. I listened to “Night Prowler” a LOT because that song was a favorite of Ramirez’s. I really wanted to included it in the film, but I couldn’t.

Luckily I came into contact with the manager of Pentagram, so we got that song {“Be Forewarned”} which ended up being perfect for that moment. That specific recording of that song is so evocative and haunting. We used some really deep cuts of metal in other places. There’s also a song by Medusa in there. I really loved going back and looking at these 80s {metal band} logos! We invented the band Death Kids, and I loved seeing young Ramirez wearing that shirt.

TIG: I know you’re a fan of Scarecrow (Video)! Can you recommend 3-5 other films about serial killers for people to rent from there?

MG: Yeah! I am. I actually watched a lot of films in preparation for this movie, but some of them are Silence of the Lambs, which is obviously a standard, Zodiac, which I think is an underrated movie, and Capote (the one with Phillip Seymour Hoffman) which is great! And this not a serial killer movie, but is definitely an influence on The Night Stalker: Dead Man Walking.

TIG: So at any point during filming, did you want to scream out “OMG that’s Chavez from Young Guns!”

MG: That’s so funny! Because for most people in the world, it’s all about La Bamba, but for me it’s absolutely Young Guns. And yes, in fact, I made him sing “Blaze of Glory” with me on set!TIG: WHAAAAT! No way. That’s amazing. MG: Yeah, I told him early on that Young Guns was my favorite movie of his. And he really appreciates any connection people to have to characters he’s played. He’s very gracious.

Now I feel like we have to add Young Guns to the Scarecrow queue, just as a thing. Anything with Lou! He also did a movie which I haven’t seen but need to that’s kind of related to this one called The First Power … except he’s on the other side of it.

TIG: I’m still processing the idea of Lou Diamond Phillips singing Blaze of Glory with you! But … last question: can you tell us what you’re working on next?
MG: Right now I am generating stuff — for the most part I’m just writing and getting things ready.

Until then, I’ll leave you with this glorious Bon Jovi video from Young Guns II for “Blaze of Glory” … which actually won both the 1990 Golden Globe and Academy Award for “Best Original Song:”