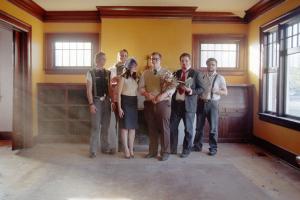 Interview with Bradley Horror of Black Eyes and Neckties

Bradley Horror, of Bellingham party rock phenomenon Black Eyes & Neckties, took time out of his pizza slinging schedule to have a few words with me about the current state of the band and where they plan to go next.

TIG: So tell me the story of how you guys got together again… I've heard rumors that it was because of a Halloween party?

BH: When Black Eyes & Neckties got together Ryan and I had already been playing/ writing music together in a punk band for two years. He and some friends decided to start a "house band" with three of the dudes who were living together: Ryan, our old keyboardist Thomas, and our old guitar player "Sexy" Ryan. David and I tagged along because they needed a vocalist and a drummer. At the time we were all really into Christian horror rock band The Deadlines, so we started a similarly themed band and called it Black Eyes and Neckties. We practiced and wrote songs over the course of two months, just in time to have a Halloween show. The show went great and everyone was obsessing over the band, so we decided to keep it going.

TIG: The organ in your songs is morbidly delicious. To me, it's really the glue that holds all these brash and amazing components of your songs together. Was the horror theme a given from the beginning?

BH: The horror theme has always been a staple. We could never stray too far away from it, otherwise it wouldn't be Black Eyes & Neckties. We based this band on that thematic element and we would be lost without it. We have always tried to stay away from that "riff rock" sound and I think ultimately it has been beneficial.

TIG: I'd say so. You've set yourself apart with your brand of sound, and I think that's part of what's made you guys so appealing to a lot of people. Who are your influences? What bands/artists remain a constant favorite?

BH: I like lo-fi minimalist music, where as someone else in the band might be partial to over-the-top, super-produced bands. I would say as a whole we try to revolve our sound around groundbreaking rock bands from the mid to late 90's who went against the grain and developed their own sound, like Drive Like Jehu, Refused and At the Drive-In.

TIG: Drive Like Jehu is one of my all-time faves. There is something about that band that kills me. If you could play a show with any local, and or national, band who would it be?
BH: Well I can't speak for everyone in the band, but I am going to anyway. Ryan: Mars Volta, Dave: Wu Tang Clan, Rich: Iron Maiden, Brenda: Modest Mouse, Josh: Britney Spears, Me: Bruce Springsteen.

TIG: I have to say that I'm also a fan of Wu-Tang and Iron Maiden as well. For different reasons of course. Haha.

TIG: Any additional tours planned for the near future?

BH: Probably not until the fall. We have a very minimal window as far as when we can tour based on our work and school obligations. We still manage to fit in a week here and two weeks there though. We are playing a lot of big shows this summer that will hopefully help to ease our tour bug.

TIG: What do you think is different between your first full length, Stiletto, and your second, Apparition!? Do you feel that it's more cohesive, more fun, more "you"?

BH: I think that both albums are accurate reflections of us as artists in their respective time and place. As far as recording quality and musicianship is concerned Apparition! is definitely the greater of the two, but when it comes to content it's really apples and oranges. I am getting too old to write the kind of songs I did on Stilleto, but we were really happy with Stiletto when it came out. We're just, as if not more, satisfied with Apparition! though.

TIG: Do you have any plans for another record in the near future?

BH: We actually just started writing new material within the last week. We have been playing/touring so much that we have been sticking to all the songs on Apparition! just to get them tighter and stimulate interest at shows. We want to do a 7" with a new song and maybe a cover or alternative recording of an Apparition! track. TIG:Have you enjoyed working with Clickpop Records? Seems that you'd get more exposure than previously, with New Regard Media.

BH: Clickpop have been amazing. They have been dedicated to us and we couldn't have asked for a better label, though New Regard was a great label to release a local album on. Clickpop go above and beyond, and that makes everything we do as a band better.

TIG: Better is good. Thank you for taking the time to let us into your horrifying world.

Keep your eyes peeled for new BENt material and check back for any new tour dates. You won't regret seeing this smashing (literally) band live. They'll kick your ass.