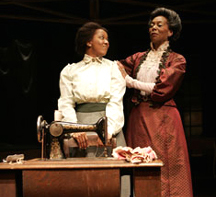 Esther (Gwendolyn Mulamba), an unmarried 35-year-old African-American woman living in the dawn of the last century, makes an uncommon living for herself in New York sewing exquisite lingerie. Though her experience up to now has included a series of beat-downs by triple-whammy prejudice (black, female, independent) she's made herself a semi-charmed kinda life highlighted by close relationships with her wealthy white clients, nosy landlady (Demene E. Hall) and devout Jewish textile vendor (Marc Jablon). She even has a little romance going — albeit a sight-unseen long-distance thing — with a seemingly poetic Barbadian man named George (Albert Jones), currently away laboring on the Panama Canal.

Such is the setup of Lynn Nottage's beautiful and haunting play Intimate Apparel, which received New York Drama Critics Circle and Outer Critics Circle Awards in 2004, and now gets a decent mounting at our lil' Intiman under the direction of Jacqueline Moscou.

The first half basically sets up the George relationship via spoken versions of the letters he and Esther exchange: she's illiterate, and alternately enlists the friendly assistance of a booty-starved Fifth Avenue hausfrau client (Mari Nelson) and a bawdy yet good-hearted hooker (Yvette Ganier), so you can maybe imagine that her missives vary in tone. But George doesn't seem to mind (or to notice the different handwriting), and the lovers finally meet in the final seconds of Act I.

Well kids, a genial homespun comedy this ain't, so I don't think I'm giving anything away by hinting at a big-time downward spiral in poor Esther's future. The surprising and very effective denouement is written impeccably, though, and some fine performances (mainly the exceptional work of Nelson, Ganier and Jablon) carry us right on though. And big props to costume designer Deb Trout for both the period garb and the titular boudoir finery that looks like a hundred-year-old Vicky's Secret catalog come to life.