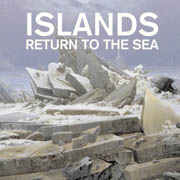 Return to the Sea

It's great when you can find the perfect summer album right before summer gets rolling. It's like finding your summer love right from the start as to get the most out of the fun and sun. The Islands first album Return to the Sea is exactly that — the summer album everyone should be listening to, but probably won't be (thank you very much, Sean Paul). The ex-members of the tragically short-lived Unicorns have dabbled even further into sonic experimentation, and although it doesn't work all the time, when they get it right, it is downright sublime, like that first pull from an Icee on a hot, sweltering summer afternoon.

Return to the Sea, recorded in Montreal with the help of members of the Arcade Fire and Wolf Parade, begins with, of all things, a 9:30 epic that slowly builds to a frenzy as "Swans (Life After Death)" heats up. Richly textured guitars, keyboards and piano fill the song to the brim with a musical electricity. It's followed by a bit of dirge with a heavy Arcade Fire influence in "Humans," which is also the most Unicorns-like song on the album. It has a playful rhythm that sounds like something you could hear in carnival (or at least made by carnies) while they sing about the downfall of civilization. (yes, I told you — summer fun!) However, neither of these songs prepare you for "Don't Call Me Whitney, Bobby." This sunny gem of a song might be the most infectious thing you will contract this summer short of West Nile virus. If you're not humming Bones, bones, brittle little bones/its not the milk you seek/it's the sun you need by June, you don't enjoy life — this is clearly 2006's "Mushaboom," a sweet pop masterpiece that you can't help but adore.

Things get interesting when the Islands start to dabble into hip-hop beats with "Where There's A Will There's a Whalebone." The beat rumble the bass of your car like any summer jam by Snoop and a crazed half spoken/half rapped verse might be the strangest occurrence of rap this side of Chuck D showing up on Newsradio. However, as much as the stars might seem to indicate otherwise, it works brilliantly. And what follows this? Why indie calypso music of course. Yes. Imagine if The Muppet Show still existed. This song would probably feature some amount of dancing penguins, possibly some hula-dancing lobsters and a bunch of horribly adorable muppets cavorting across a beach. The Islands live up to their name with steel drums and flutes that evoke a tropical breeze with a drink in your hand. This experimentation is brought to a peak on "Tsuxiit," an instrumental track that hovers somewhere between Kraftwerk and samba (wait, isn't that Senor Coconut territory?)

Now, Return to the Sea also has a few outside factors that make me fond of it, the most obvious is the odd focus on two tracks on geology (yes, my alter-ego is that of a mild-mannered geologist — gotta pay the bills). "Rough Gem" is a charming pop song that sounds like Burt Bacharach on speed (or at least vast amounts of caffeine) as string arrangements and horns dance between the bassline and they singdig deep/but don't dig too deep. This is matched by "Volcanoes" (gasp!), where we're warned that the world will end in 2007 at the hands of a giant volcanoes (I told you so. The song has sort of an old-timey gait to it, with fiddles meshing with guitars, like an folk song alerting us to the dangers of a rain of magma (well, technically, lava at the surface.) Never has total Armageddon sounded like so much fun!

The album closes with a trio of slower numbers that aren't nearly as much fun as the opening tracks, but they counterpoint the underlying metaphor quite well. "If" a foot-shuffling love song with such touching thoughts like If you ain't sweet to me/I'll desert you in a heartbeat and ends with a charming woodwind solo that would make Woody Allen proud. ""Ones" breaks like waves on the shore, almost like the first grey days of fall bringing summer to a close.

The end result of listening to Return to the Sea is the realization that making fun indie music is not only possible in our lifetime, it has been achieved. It expands the genre with its cross-pollinated songs without getting bogged down without overly pretentious artsiness (ahem, Broken Social Scene). If you liked the Unicorns, heck if you like music at all, this is your summer fun album. Yes, get your patsy white skin out of the coffee shops and bars and enjoy the sun for a change. Why not try the Islands, I hear they're lovely this time of year.