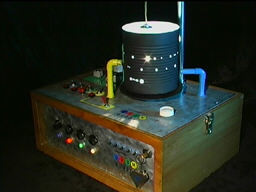 I want my own Drum Buddy

It's probably a good thing that I don't have immediate access to several thousand dollars because I could see myself impulsively buying my own Drum Buddy – even if I'm not a musician (and therefore wouldn't have much practical use for it).

Mentioned briefly in my review of Friday night's Quintron and Miss Pussycat show, the Drum Buddy is a drum machine invented by Mr. Quintron that, according to Wikipedia:

…is a light-activated oscillating drum machine which operates on the principles of an optical theremin. An electronic instrument developed in the Spellcaster Lodge QElectronics laboratory, only 44 units hand-assembled by Quintron exist. Its four voices – Space, Snare, Bass and Kick, are triggered by activating a photoelectric cell either intermittently or with an on/off DIP switch in combination with exposure to light.

The Drum Buddy is outfitted with a light fixture on a periscopic pipe fixed to its base. The fixture's bulb can be controlled by means of a dimmer switch. The bulb hangs above a rotating platen upon which a number 10 can (the large size common to coffee, canned vegetables and some sauces) prepared with holes and non-reflective paint is placed. As the can rotates, its holes pass the Drum Buddy's photoelectric cells, firing drum-like tones and theremin or Moog synthesizer-like chirps or buzzes.

Accomplished purveyors of the Drum Buddy can operate the instrument freestyle by "scratching" the can back and forth against the resistance of the platen's motor or by performing short solos on the bass channel's 12-point chromatic scale.

Earlier this year, Mr. Quintron auctioned off 10 Drum Buddies on Ebay, with a starting bid of $5,000. Some of the proud owners include Laurie Anderson and Nels Cline (of Wilco).

…and here's an excerpt from an actual infomercial that is priceless (from 2000):